The Ninja Turtles Have a New Origin Story in the Upcoming Movie, and It Doesn’t Sound Bad So Far 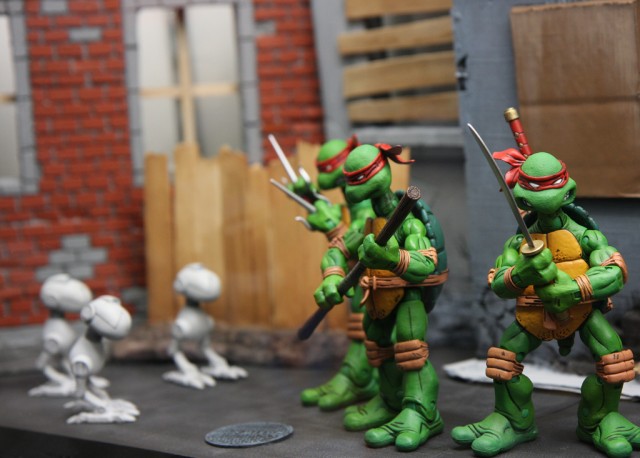 Paramount used CinemaCon to show off some details about their upcoming films, and the teaser for the new, Michael Bay Ninja Turtles movie was among their offerings. This is probably the same trailer we’ll get next month with The Winter Soldier, and it finally dropped some new origin info and a look at the Turtles.

Of course, we only have second hand info to go on so far, but here’s a summary of what those who have seen the trailer have gotten from it from ComingSoon:

What was essentially a teaser didn’t show too much, but it did give us an idea of the Turtles’ new origin story. With a voice-over by William Fichtner, who plays Shredder, we see cameras panning across the city as he talks about how crime and violence has run rampant across the city, essentially destroying it. As he talks, we see some of that, including a building literally being destroyed and some criminals being taken out of action in the subway (presumably by the Turtles) as Megan Fox’s reporter April O’Neil watches on. The voice-over goes on to say that “people need heroes” and that “heroes aren’t born, they’re created” and we then see that Fichtner (not in his Shredder costume) is talking to April, telling her that he was working with her father to create the Teenage Mutant Ninja Turtles. We see a couple of quick shots of the Turtles’ unmistakable green arms being infused with presumably radioactive materials.

Then, they got a look at the Turtles as they got the drop on April in an alley. The CG Turtles reportedly look like… the Turtles, actually, despite the fears of many. They look, “Essentially like the ones from the earlier movies,” which is just fine by me. Of course, they’ve got some added costume pieces on top of that, which we’ve discussed before, but they’ll probably look fairly familiar.

Phew. (I wasn’t actually too worried about this, which I’ve mentioned before, but some confirmation is nice.) Now let’s just hope they’re animated well when they’re in action, and we’ll be set.

Still, there’s the matter of the origin story. I don’t know if purists are going to disagree with me here, but I really don’t mind the shift to the “Shredder built the Turtles” story. I mean, a year ago, I was fully expecting the Turtles to be from outer space based on rumors, so maybe that softened me up a bit to this origin, which is, by comparison, a lot closer to the source material.

Of course, the teaser was still light on any plot details, so this could still all go horribly wrong, but so far I see no reason to panic. At worst, it’ll probably be a mediocre and forgettable movie, which wouldn’t be any worse than a lot of Turtles stuff from recent years, and we’ll always have the spectacular original movie that you can still watch and love. If it turns out to be great, it’ll be a nice surprise. Either way, we all win.

I’m curious about how Splinter fits into this new story, though. He’s definitely in the film, but it doesn’t sound like he appeared in the teaser. It’s easy to imagine that he was just another one of many experiments that Shredder went through, or perhaps he was more a Curt Connors/The Lizard scenario from Spider-Man where Hamato Yoshi is working with Shredder, but he gets impatient and decides to move into human ooze trials on himself.

Either way, hearing that the origin story is reasonably close to the original while still trying to be new and interesting is actually making me feel a whole lot more optimistic about this movie. Now I just have to try to keep from getting my hopes up too high, so that I don’t set up impossible expectations that will never be met and—whoops, too late.

(via ComingSoon, image via Nathan Rupert)