Interview: The Zookeeper’s Wife‘s Niki Caro and Jessica Chastain on Rape in Film, Working with Daniel Brühl and More

"I appreciate a film that doesn't rely on a rape scene to get an audience to feel an emotion."

When it comes to films set during WWII, they often focus on the brave soldiers who either risked or sacrificed their lives for the greater good. These tales, while epic and every bit deserving of recognition, aren’t the only stories to be told. That’s why I also appreciate a film like The Zoopkeer’s Wife, which puts the spotlight on an ordinary but heroic couple performing an extraordinary act.

Based on the book of the same name by Diane Ackerman, the film centers on Jan and Antonina Żabiński, the real-life couple who managed to smuggle 300 Jews from the Warsaw Ghetto into their zoo while it was being used as an encampment for Nazi soldiers. A number of people brought their incredible story to the big screen including director Niki Caro, screenwriter Angela Workman, and stars Jessica Chastain, Johan Heldenbergh, and Daniel Brühl.

I had the chance to speak with Chastain and Caro about what sets this film apart from others in the genre, how they handled two key sexual assaults, and why it’s important to include more stories with strong women like this one about Antonina.

On working with Daniel Brühl…

NC: And really nuanced, too. One of the things about [his character] Lutz Heck … I was determined that he wasn’t gonna be another mustache-twirling Nazi villain, and Daniel brings such nuance and subtlety to that role. He is brilliant and brings a complexity to i t… Also, a softness to it and a beautiful partner for Jessica. So much trust there.

JC: There was so much laughter on the set. Also, what I love so much about what he did is a lot of people say, “Oh if that happened … it could never happen today. I would go against the government” or “I would stand up for my neighbors” and he plays Lutz Heck as this ordinary man—scientist—who kind of just got wrapped up in the power of what it meant to put on that outfit … and you see him kind of in opposition to it. Even Antonina says as the end, “You’re not like that. That’s not who you are. I know you.” I like that he shows that an ordinary scientist could get wrapped up in that.

NC: And that Antonina reveals his humanity and, ultimately, his redemption. He doesn’t —

NC: Because he has true feelings for her.

The Mary Sue: A lot of our readers are concerned with the way that rape is often handled on film. How did you approach those scenes with this movie, and was there ever concern about it being gratuitous?

NC: There never is with me. There just isn’t because as women, rape is never gonna be a fantasy for us. It’s going to be a reality. And the way he manhandles her, all of that is real. Equally real is her looking him in the eye and saying, “You disgust me.” And in that truth, that simple truth, And so I think that’s truthful more than an overblown scene of violence against women.

JC: But also with the scene with Urszula (played by Shira Haas). We know what’s happening to Urszula but in the way we’re put in the mind of Jan … he knows what’s happening to her but he’s not witnessing it and I appreciate a film that doesn’t rely on a rape scene to get an audience to feel an emotion. And sometimes I find that it’s meant to titillate or have this hyped up sense of “okay, now we must revenge” or now the woman’s gonna be strong because she was just raped and she has something to overcome. I have a lot of difficulties with rape scenes in the American film industry because I don’t think that they are being filmed responsibly. So I was very happy to do this film with Niki. 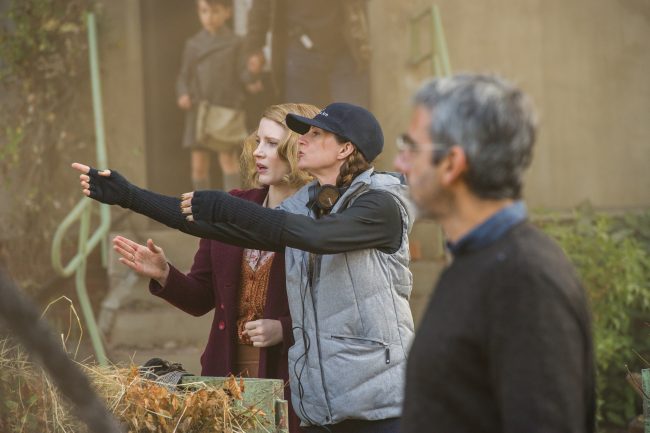 On what sets this movie apart from other WWII films …

NC: The difference with this movie, I think, is that it’s profoundly feminine. And that’s very new. It’s very new in cinema and so it was pretty exhilarating for me to work in that way because it’s so powerful. You know, femininity had often been … almost always equated with weakness. And Antonina shows us that femininity is pure strength and that they are not mutually exclusive.

TMS: Diane Ackerman said something similar, that to be a hero, you don’t necessarily have to be the one holding a gun. It can also be an Antonina who is helping these people in that way.

NC: And, as Jessica says, to be an ordinary person. I mean, the Zabinskis were ordinary people in many ways and they did what they did. They did this extraordinary stuff for no other reason than it was the right thing to do. That human decency, that radical humanism, is exhilarating to me. It’s inspiring. It’s worth making movies about. It’s worth sharing, particularly now.

TMS: Yeah, this movie is so relevant because of the rise of populism.What do you want people to take away the most from a film like this?

NC: We started out making a historical drama and world events have shown us that we’ve made a profoundly contemporary film. I hope people go and see it and revisit what happened in the 1930s and 1940s, and recognize that there are horrifying parallels to what is happening right now. But also that the movie shows us that there is healing and there is hope and that we can each stand up. We can step up.

On whether or not we’re capable of world peace…

NC: I think we’re suffering a radical over-correction of something I thought was going very well. I think we’re gonna have to get to world peace or some measure of it, otherwise, we will destroy ourselves.

JC: And I think once we can get to a place as human beings where we realize you shouldn’t own or possess another living thing and that includes animals in a way … Like, I know we all have our animals but most cases it’s more like family members …When we realize that, I think it’s going to solve a lot of problems.

TMS: You often take on films with strong female characters. Is that deliberate? And can you say anything about Mulan?

NC: It’s not a deliberate choice. It’s not a political choice. It’s just that those are the interesting stories. That’s the frontier as a filmmaker … All the stuff is new. I really believe it’s no big secret and conspiracy why we didn’t know this story beforehand. I mean, nobody knew Antonina’s story. I think the fact that it’s a female story is why it slipped through the seams of history and that somehow women’s stories were not considered particularly relevant. So now, I’m thinking what else is out there that can now be explored? The female experience is the frontier of cinematic storytelling as far as I’m concerned …  and Mulan!

JC: Well, I see every woman as a strong woman. And I see every man as an emotional, sensitive man. Maybe not every man (laughs). But I think for me, it goes along with what Niki said. There are stories in history that have been ignored. I think women in history have been ignored. I remember being in school and I wasn’t learning about the incredible things that women did. Since I’ve become an adult and I’m doing my research, I’m learning about Belva Lockwood who was the first woman to run for president before a woman could even vote.

There’s all these women that have created a path that we walk along today and to acknowledge them and to have representation of these great leaders … these women that have creative opportunities for all of us…to have those representations in the media helps young girls know that it’s possible. When we’re young, we think we can do anything and it’s society that tells us we can’t. And so what we need to do is we need to change that. We need to change the stereotype of what a woman is supposed to be and what she’s expected to do and say, actually no, she can do anything she wants.

The Zookeeper’s Wife heads to theaters on March 31.