In Defiance of Trump’s “Son of a Bitch” Rant, Scores of NFL Players Take A Knee During the Anthem 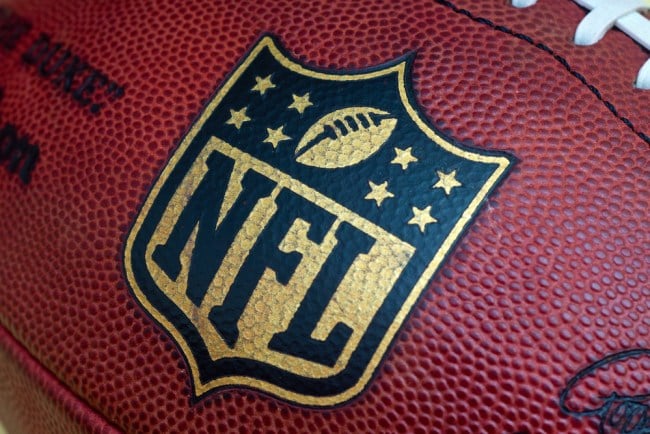 Trump continues to show that the only way he unites America is in a general disgust at his behavior.

During Sunday’s NFL games, scores of NFL players knelt during the national anthem, imitating the protest initiated by Colin Kaepernick, the former 49ers quarterback who took a knee during the anthem to protest police brutality and racial injustice. The widespread protest was adopted after Donald Trump lashed out at Kaepernick’s actions in a campaign rally, saying, “Wouldn’t you love to see one of these NFL owners, when somebody disrespects our flag, to say, ‘Get that son of a bitch off the field right now – He’s fired’?”

(Trump also doubled down and called for a boycott of the NFL until the protests stop, hilariously not realizing that there was already a left-wing call for a boycott against the league’s racism.)

There are a lot of football games on Sundays, and players protested at almost every single one. Even those players who didn’t kneel linked arms in a sign of unity with their teammates, and almost every football organization had issued a statement of support for protesting players before today’s games.

Of course, this particular political act doesn’t absolve the NFL of its many, many issues. This is still an organization that disregards the health of its players, historically exploited its nonprofit status and currently bullies states for subsidies and tax breaks, enforces racist ideas about who’s best for different positions, tries to bury medical evidence of CTE, uses scabs to union-bust its referees, and enables domestic abusers. When we’re talking net impact, this is an organization that does a whole lotta harm.

But the players who knelt today received the support of their employers as they exercised their First Amendment rights to advocate for racial justice. They found the bravery to take a stand, and the support of their teammates, in the face of a tyrannical white supremacist calling for their silence. That’s a great thing – and given the contracts that many of us sign with our employers, and the racist calls for “respect” and “gratitude” that often follow the political speech of prominent black Americans, it isn’t a freedom that’s guaranteed. Hell, some fans in the stadium still booed the players who took a knee.

So it’s a victory worth celebrating – even if the organization where it’s happening still isn’t.

Below are just a few examples of kneeling and protesting players.

Marcell Dareus was very emotional as the anthem came to an end #Bills @WKBW pic.twitter.com/jEzOnoPcHf

Von Miller among dozens of #Broncos players who kneeled for national anthem https://t.co/4r3SN7nKFv
by @NickiJhabvala pic.twitter.com/JjArqrqfhc

Miami Dolphins
Even among the Dolphins who stood for the anthem, a number of players wore T-shirts that read, “#ImWithKap[Colin Kaepernick]”

Just in: NFL players link arms and kneel during the national anthem at the Ravens vs. Jaguars game in London https://t.co/m4NFGeIDN9

Here are eight members of the Detroit Lions kneeling. Many broadcasts apparently didn’t show much of the protests. #TakeAKnee pic.twitter.com/mAZobqaKl7

New England Patriots players took a knee at Gillette Stadium before their game against the Houston Texans. https://t.co/EbGgeQ9Bmf pic.twitter.com/HiPUyUiW6H

Ravens and Jaguars players kneel during the national anthem in wake of Trump’s comments https://t.co/dVRot82Wnn pic.twitter.com/q50xs8vZZP

Pittsburgh Steelers
The Steelers stayed inside the locker room for the anthem, with the exception of Alejandro Villanueva, who served in the military and wanted to be present. The Steelers head coach, Mike Tomlin, said, “We’re not participating in the anthem today, not to be disrespectful to the anthem but to remove ourselves from the circumstance. People shouldn’t have to choose.”

(Via Buzzfeed News; image via Shutterstock)