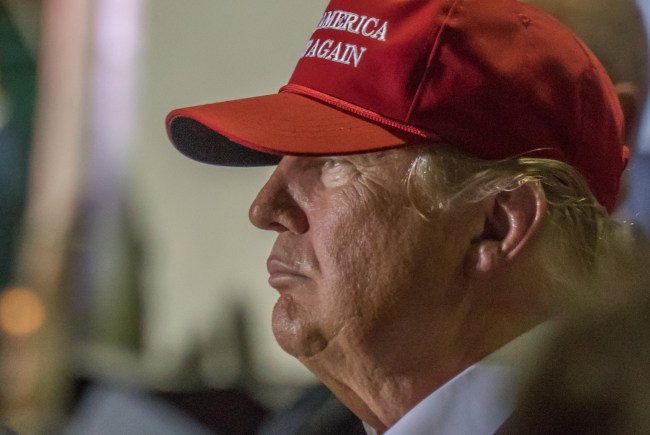 UPDATE: The Golden State Warriors, given Trump’s tweet, have announced that they will not visit the White House.

This weekend, Trump did his best to remind us that Jemele Hill’s criticism of him as a white supremacist was entirely accurate. I know we don’t cover a ton of sports here at The Mary Sue, but we do cover social justice – and Trump spent this week attacking a number of professional athletes because they’re black, successful, and opinionated. It’s racist as hell, and it echoes all his resentments of Obama.

First, on a Friday campaign rally in Alabama, Trump went after NFL player Colin Kaepernick, the former San Francisco 49ers quarterback who knelt during the national anthem to protest police brutality. Kaepernick inspired other athletes to adopt the same silent, powerful method of protest, and he is currently a free agent without a contract (likely because of all the right-wing backlash against his exercise of free speech).

Though Trump didn’t refer to Kaepernick by name, he asked the rally crowd, “Wouldn’t you love to see one of these NFL owners, when somebody disrespects our flag, to say, ‘Get that son of a bitch off the field right now – He’s fired’?”

This is Trump, a man who waffled about condemning a KKK Grand Wizard and called the Charlottesville torch bearers “very fine people.” But Kaepernick? He’s apparently a “son of a bitch” for advocating for racial justice.

If a player wants the privilege of making millions of dollars in the NFL,or other leagues, he or she should not be allowed to disrespect….

…our Great American Flag (or Country) and should stand for the National Anthem. If not, YOU’RE FIRED. Find something else to do!

Not a day after the rally, Trump went on his typical weekend tweetstorm, and among his many targets was NBA superstar Steph Curry. Curry, a superstar player on the NBA Champion Golden State Warriors, had said he would vote against the traditional team trip to the White House – emphasizing that it was still a group decision.

“That’s going to be my vote when I meet with the team, but it is a collective,” he said. “It’s not just about me, it’s not just about KD [Kevin Durant]. It’s about the whole team, and what we were able to accomplish as a team, and the opportunity that historically has been afforded to championship teams. So, we’ll have that conversation and we’ll do it as a group and we’ll have one voice.”

“Obviously,” he continued, “you don’t want to rush your decision on understanding the magnitude of what this means. We have an opportunity to send a statement that hopefully encourages unity, encourages us to just appreciate what it means to be American and stand for something. So, whatever your opinion is on either side … we want to take advantage of this opportunity.”

In response to that mature and thoughtful statement of principled personal opposition, Trump tweeted this:

Going to the White House is considered a great honor for a championship team.Stephen Curry is hesitating,therefore invitation is withdrawn!

Luckily, the civilized world went after Trump for his bullshit. Kaepernick’s mom let Trump know that she was fiercely proud of her son, snapping back with the following tweet:

Guess that makes me a proud bitch!

She also gave an amazing interview with Deadspin, where she said, “There are a lot of racist people in that crowd [at his rallies], a lot of people that are just looking for something to get hyped about, and this is the kind of thing he does. It’s like a bully on a playground, I guess. It’s almost what I’ve come to expect from him…In Charlottesville, he would not call out the Nazis, not call out the white supremacists, but he’s calling out these guys who are peacefully kneeling and asking for their country to do better.”

Devin McCourty, a team captain for the New England Patriots, was one of several Patriots players who decided not to visit the White House this past April after they won the Super Bowl. He tweeted the below, and it really sums up both the Curry and Kaepernick situation:

Ppl said it was disrespectful not going to the White House..I’m sure they are quiet about us being called “sons of bitches” ‍♂️(D-Mac)

Kaepernick is “disrespectful” for kneeling during the national anthem; Curry is “disrespectful” because he doesn’t want to visit the White House. But Trump calling any principled advocate of racial justice a “son of a bitch”? Weirdly, the “respect” crowd doesn’t seem to care about decency anymore. This is because those calls for “respect” were really calls for silence and deference from non-white athletes.

McCourty is only one of dozens of NFL athletes who’ve criticized Trump for his comments.

Meanwhile, LeBron James responded to Trump’s criticism of Curry with the aptest, most succinct rebuttal:

U bum @StephenCurry30 already said he ain’t going! So therefore ain’t no invite. Going to White House was a great honor until you showed up!

And of course, the Obamas’ White House photographer had a perfect image for the moment:

President Obama with Steph Curry last year at the White House. The President was “helping” Steph with his jump shot release.

It’s heartening that so many people are speaking out against and – pardon the pun – dunking on Trump’s racist, vulgar attacks on these athletes’ free speech. Even the NFL Players’ Assocation, a union which routinely fails its members in troubling ways, issued strong statements in support of Kaepernick and other protesters, calling Trump’s statement “a slap in the face to the civil rights heroes of the past and present” and declaring “this union…will never back down when it comes to protecting the constitutional rights of our players as citizens.”

It’s important that we condemn these comments as the petty, disturbingly authoritarian responses to free speech that they are. A president who can bear no criticism is not a president who respects the Constitution or his constituents, and that needs to be pointed out and condemned.

However, it’s equally important that we call these comments out for what they are: part of a larger pattern of racist, white supremacist resentment that defines Trump’s approach to non-white Americans.

(Via GQ, HuffPost, ESPN, and USA Today; image via Shutterstock)