The New Ultimate Spider-Man Is Revealed

Yesterday, we addressed the speculations on who the new man behind the Spidey mask will be, and today the news is out. And it’s official: the man taking over for the late Peter Parker in Ultimate Spider-Man is not white. His name is Miles Morales, a teenager who is half-black, half-Hispanic. See him unmasked after the jump.

Meet Miles Morales! Here is what he looks like in this panel released to USA Today: 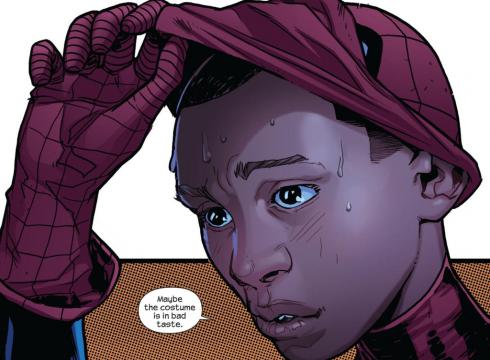 While the beginning of his journey as Spidey is humble — he breaks up a fight, and that’s pretty much it — Marvel’s editor in chief Axel Alonso promises a similar journey to that of Peter Parker as Morales taps into the great power that comes with great responsibility. Morales will also be getting guidance from characters associated with Parker, specifically Aunt May and Gwen Stacy. But as similar as those journeys may be, there is a lot of recognition that Miles Morales is a brand new Spidey with something even newer to offer: diversity. And progress. Says Alonso:

“What you have is a Spider-Man for the 21st century who’s reflective of our culture and diversity. We think that readers will fall in love with Miles Morales the same way they fell in love with Peter Parker.”

And the artist who helped create Miles Morales, Sara Pichelli, thinks that this is merely a step in Marvel’s own journey into a more diverse lineup:

“Maybe sooner or later a black or gay — or both — hero will be considered something absolutely normal.”

The first issue featuring Miles Morales will be released in September, both in stores and as a digital release. You can read the official press release from Marvel at their site.