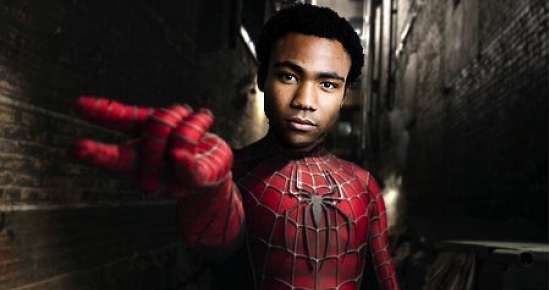 An announcement by Marvel concerning Ultimate Spider-Man is coming tonight, and there is a lot of speculation that Spidey’s alter ego could be African-American. As we all know, Peter Parker died in Issue #160, leaving room for a new hero to take his place. And what with the really fun Twitter campaign to consider casting comedian Donald Glover as Spidey (pictured above), it’s possible that a light bulb went off in someone’s head that this might be a really good idea. Could there be a racist backlash? Yeah, probably. Oh wait, there was one? Ucccccchh. Well, here we go.

Bleeding Cool’s Richard Johnston has already contended with one racist reaction to a possible African-American Spider-Man, and most likely, there will be plenty of similar reactions. But let’s focus on the positive and let ignorant people be ignorant far, far away from this space.

It’s certainly a great, progressive step in the right direction to cast a race other than Caucasian as the man behind Spidey. Especially if he lives in New York City, where the minority population outnumbers Caucasians. So it really makes logical sense. There are also existing characters who could take over the heroics, such as Ben Reilly, a lab assistant who appeared in the “Clone Saga” and was a clone of Peter Parker himself who has worn the Spidey suit before as the Scarlet Spider.

But did the Glover effort — which Stan Lee supported — have an effect on this? At the time, Lee said that an African-American Spider-Man “shouldn’t be a racial issue,” but that it might confuse the audience:

“Everybody seems to be familiar with Spider-Man, so I say that it isn’t that it’s a racial issue — it’s just that it might be confusing to people,” he explained. “But that’s a matter for the people at Marvel to take into consideration. I certainly don’t want to weigh in on it in any way, except to say I think [Glover] is a fine actor.”

Once again, this is all speculation at this point. But it’s speculation about a potentially awesome development. We will keep you posted following the announcement.