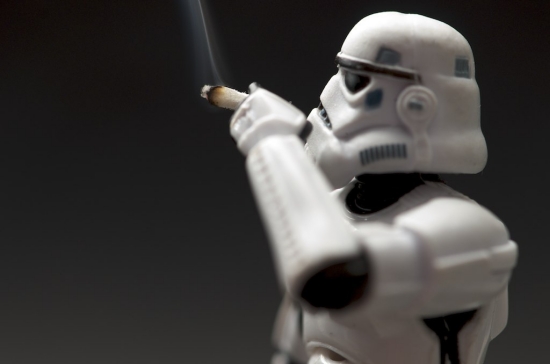 A new study done by a University of Toronto professor says that smokers who quit by the age of 40 can get back most of the decade of life they could otherwise expect to lose due to smoking. Professor Prabhat Jha and his team analyzed health and death records of Americans to study the benefits of quitting smoking at different ages. The findings are in no way a call to “smoke ’em if you got ’em” and then quit at 40 since smoking poses serious health risks — even in the short term — but the study does show that quitting early can greatly extent the life of a smoker.

Jha says the records he studied show that smoking cuts at least ten years from a person’s life. That corresponds with similar findings from studies done in Britain, Japan, and the United States, but Jha points out that those years aren’t necessarily taken from the end of one’s life:

This loss of life is not at old age. Let’s say, “You’re not going to reach age 85, you’ll only live to 75.” No. Most of it is actually in middle age when you have good healthy life otherwise. You’re losing a good healthy decade of life.

The study also shows that people who quit smoking before they turn 30 have near identical life spans to non-smokers. Again, though, that doesn’t mean it’s fine to smoke and then quit at 30. The study finds that overall, those who never smoked are twice as likely to live to age 80 than smokers.

It’s not too late for those still smoking past 40. Smokers who quit between ages 45 and 54 got back six years, and even smokers ages 55 to 64 saw an additional four years. The findings clearly support that it’s best to never smoke at all — which should come as a surprise to no one at this point —  but it’s a heartening find that smokers of any age have something to gain by quitting.

Jha even released a video summarizing his findings:

(via University of Toronto, image via Kalexanderson)