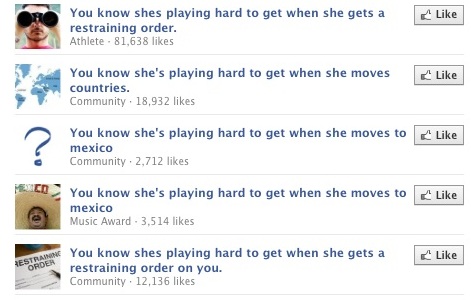 Despite the loss of three major advertisers and a pretty large amount of backlash, Facebook has still not taken a firm stand against pages dedicated to rape jokes, saying that they’re just jokes. Hilarious, violence-inciting jokes that are actually against their policy that prohibits “content that is hateful, threatening, or pornographic; incites violence; or contains nudity or graphic or gratuitous violence.” After quietly removing many rape-joke pages earlier this week, it seems that Facebook has not instituted any firm policies to prevent or remove any more pages, since more have been created since. Stay classy, Facebook.

Ms. Magazine reports that not only has Facebook refused to clarify — or, apparently, enforce — their own policy against hateful, threatening, or violent content, but they are not doing anything about the new pages that are springing up in the wake of the first round of deleted pages:

But according to Facebook, making light of rape and violence against women is an “institution,” and restricting it would be an infringement on free speech:

“Groups or pages that express an opinion on a state, institution, or set of beliefs – even if that opinion is outrageous or offensive to some – do not by themselves violate our policies.

“These online discussions are a reflection of those happening offline, where conversations happen freely.”

No, really. Facebook said that, to the BBC. Seriously. Much like golf, religious beliefs, and Must See TV, rape jokes are a part of our culture, and we just have to accept them. Never mind that they are clearly “hateful, threatening,” and “incite violence” against women, flying in the face of Facebook’s own policy.

It’s hard to say what’s worse: the fact that hundreds of thousands of people elect to “like” pages with titles such as “You know she’s playing hard to get when you use another roll of tape” and “What’s 10 inches and gets girls to have sex with me? My knife.” Or that classic chestnut, “Kicking sluts in the vagina because its [sic] funny watching your foot disappear.” Or that Facebook refuses to acknowledge that such pages are not only offensive to a very wide audience of people, but against their own policy. Still, they pull the whole “We’re sorry if some people are offended, but …” schtick and offer comments to the actual press like this, excluding the whole “sorry” part:

While some of the offending pages have been taken down, Facebook has clearly displayed a total lack of understanding by declining to make their policy stronger and clearer. The Huffington Post reports that some of the original pages are still active:

At the time of this writing [November 9], “How dare you call me a rapist!!! Jk, Get in the Van,” remains active and has more than 262,000 “likes.” “If I wanted you to open your mouth I would have dropped my pants,” a page that has garnered 40,908 “likes,” is also up and running, as is “Throwing eggs at sluts, brick shaped eggs — made from brick,” which invites people to rate other users’ photos with comments like “drown” or “hit……. With a shovel.”

After a quick check, the “dropped my pants” link was gone, but imitators are out there. And labeled as a “local business,” which is odd because Facebook’s rules state that such pages must be labeled as “humor.”

And it’s those imitators that Facebook is at the moment okay with, creating an increasingly hostile environment for women, continuing to support the idea that violence against women is a joke that we humorless feminists should just get the hell over and laugh about. Look, there are rape jokes and then there are rape jokes that lack the very essential “humor” portion of what makes a joke a joke. These pages are, primarily, not funny and are focused only on the most violent aspects of rape. The fact that Facebook doesn’t want to do anything about them is, to say the very least, disappointing, and to go further, disturbing.

Sony, Blackberry, and American Express have all pulled their advertising. If they’re smart, more will follow.