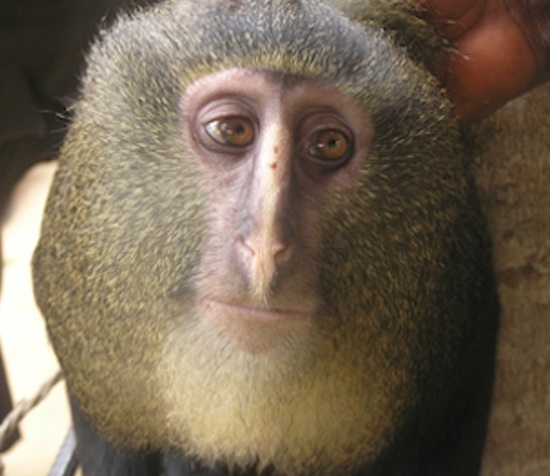 Pictured here looking for all the world like it just wants to hear about your day and maybe fix you a cup of tea, the lesula, or Cercopithecus lomamiensis, has been known to locals in the Democratic Republic of Congo for generations, but was only described by science this week in the journal PLos ONE. The study is the culmination of six year of work by an international team of researchers. That work, which ranged from tracking down lesula carcasses left behind by leopards to trapping live specimens for study to the comparatively simple job of sequencing and comparing DNA, has all paid off, marking the first discovery of a new primate species in Africa in 28 years.

Of course, once humans know that a thing exists, chances are pretty good that thing is in trouble, and that old story is no different for the lesula, because we’re jerks that way. The lesula’s range covers very little ground, but most of its habitat is remote and largely unsettled by humans. Even so, the apparently delicious monkeys are popular targets for hunters supplying the bush meat industry in the region. While researchers are now aware that the lesula is a thing that exists, data on its population is not yet a thing that exists.

With that in mind, researchers are hoping to see some protections for  what could very well be a species already on the brink. “Species with small ranges like the lesula can move from vulnerable to seriously endangered over the course of just a few years,” point out lead researchers John and Terese Hart.

(via PhysOrg, PLoS ONE)