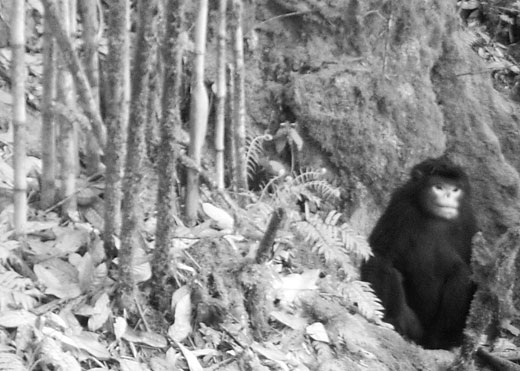 In 2010, the Myanmar snub-nosed monkey was introduced to science and added to the list of primates that live in the Kachin state region of Burma, near China. However, that description came from a dead specimen provided by a local hunter. No one had seen a live  snub-nosed monkey before, until a joint effort between conservation groups managed to capture the first ever images of this rare monkey.

The monkey is small, and almost entirely black save for tufts of white fur on its ears and chin. It’s tail is quite long, about 140% of its total body length. Because of its strange upturned nose, locals say it sneezes in the rain — making it particularly easy to track. The camera traps were placed as part of a joint expedition by the Biodiversity And Nature Conservation Association, Fauna & Flora International, and the People Resources and Conservation Foundation.

While it is new to science, the snub-nosed monkey is already in a dire situation. Biologists estimate that there are only 260-330 monkeys alive today, meaning that the species is critically endangered. Fauna and Flora International says that the already rare monkey is seeing its habitat greatly reduced due to logging in the area, and the creation of roads to support that logging.

Though the odds are certainly against these little monkeys, there is some hope. PhysOrg quotes Saw Soe Aung, one of the field biologists who helped place the cameras, as saying:

“It was exciting to see that some of the females were carrying babies – a new generation of our rarest primate.” 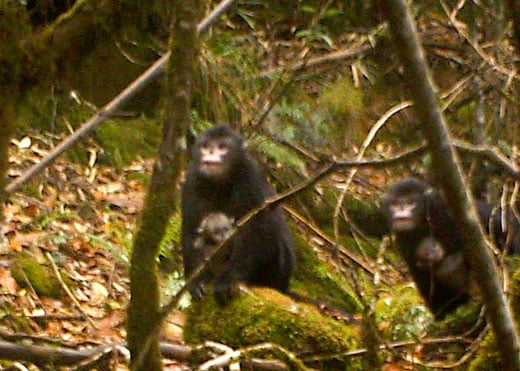 (Fauna and Flora International via PhysOrg)