New Line Cinema is Making a Rampage Movie for Some Reason 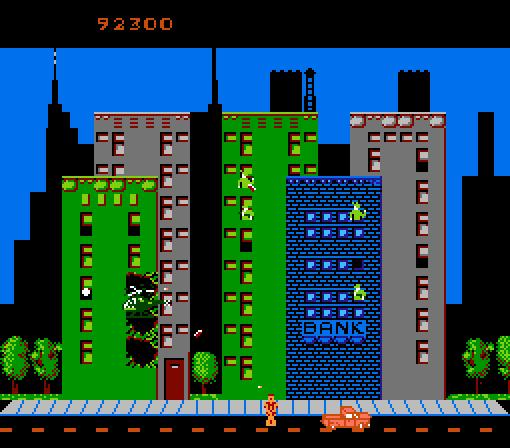 One of the best games of the young console video game industry, city destruction simulator Rampage, is currently under development by New Line Cinema to hit the silver screen. The game, which has been remade a few times since its initial arcade release in 1986, featured a small cast of the usual suspects of big monsters from movies that destroy cities — a big gorilla, and a big lizard — and also a giant wolfman because why not. The goal of the game is to destroy buildings by punching them and eat people, and when one city is sufficiently destroyed, the troupe of monsters would move to the next. This is now being developed as a movie.

The game holds a place in many of our gaming hearts, but with the terrible track record of video-game-to-film adaptations, and the assumption that this movie will probably just be like your typical Godzilla or Cloverfield, our gaming hearts probably don’t want this movie to come to fruition.

Jon Rickard, who co-produced movies like Final Destination, A Nightmare on Elm Street, and Horrible Bosses, is set to produce the Rampage movie and will be meeting with writers to develop a story for the project. One can only assume it’ll either be about giant monsters that destroy a city, or the humans that were mutated into the giant monsters, who will them proceed to destroy a city.

The Hollywood Reporter reports that “the project aims to take advantage of the title and the visuals of the game,” so we should assume that the movie will be called Rampage, and will feature 8-bit, pixelated people screaming out of windows, and a giant gorilla and giant lizard playing tennis with the sewer cover.

No word yet on whether or not Chicago will rebuild itself long after it has been destroyed in the movie, causing the cast to travel back there, annoyed, and destroy it again.