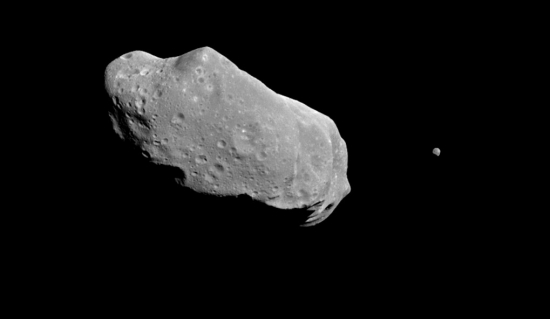 While you were sleeping, an asteroid that was just discovered two days ago made a close pass by Earth at 2:35 a.m. ET. How close? Within lunar orbit close. There was nothing to worry about, as it was clear this asteroid — roughly the size of the object that recently exploded over Russia — had no chance of hitting the Earth. Though it is a little unsettling that it was discovered with so little time before its near miss, the bright side is that we discovered it at all. Every asteroid, it seems, has a silver lining.

The asteroid, named 2013 EC, passed just within the Moon’s orbit early this morning at a distance of around 246,000 miles. Yesterday, Gianluca Masi of the Virtual Telescope Project hosted a Google+ Hangout while he had a live view of the asteroid at about twice the distance of the Moon. If you have an hour to kill, you will learn an awful lot about asteroids and EC 2013 specifically:

If you don’t have an hour, an important take-away is that Masi said:

That we are finding all these asteroids recently does not mean that we are being visited by more asteroids, just that our ability to detect them has gotten so much better. Our technology has improved a lot over the past decades.

The pessimistic view of this is that an asteroid came without the distance of the Moon, and we only knew it existed two days before that happened, but an optimist would say that we had a whole two days we would not have had just a few years ago. Sure, there’s still really nothing we can do within two days to stop an asteroid about to hit Earth, but at least we’d have two days to say goodbye.

(via Phys Org, image via midwesternnerd)