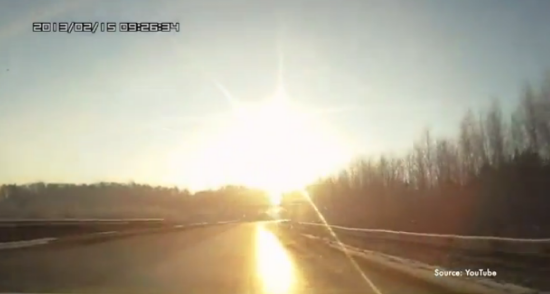 There were a lot more questions than answers when a meteor exploded over Russia’s Ural mountains earlier this month, but NASA has finally come out with what details it can regarding the event. They’ve released a new ScienceCast video through their ScienceAtNASA YouTube channel that explains what happened, and why no one saw it coming.

One of the most surprising things about the Russian meteor is that when it hit everyone was looking to see asteroid 2012 DA14 skip by the Earth at just over 17,000 miles away a few hours later. The object that hit Russia wasn’t on anyone’s radar, because it came at the Earth from the direction of the Sun, which kept it hidden.

New data from the Comprehensive Test Ban Treaty Organization was gathered using infrasound sensors that normally monitor nuclear explosions. The meteor hit with the impact of 470 kilotons of TNT, which is equivalent to about 30 times to power of the bomb that hit Hiroshima in World War II. Infrasound is very low-frequency sound waves that humans can’t hear, but some other animals like homing pigeons can detect.

Analysts have used the trajectory of the meteor to determine its origin to be an asteroid belt about 2.5 times farther from the Sun than the Earth. Bill Cooke from NASA’s Meteoroid Environment Office looked at the data and said that the Russian meteor was in no way connected to DA14. “The fact that they reached Earth on the same day, one just a little closer than the other, appears to be a complete coincidence,” he said.

Here’s the video with NASA’s full explanation of what happened: