Russian Meteorite Explosion Was As Powerful As 30 Hiroshima Atomic Bombs 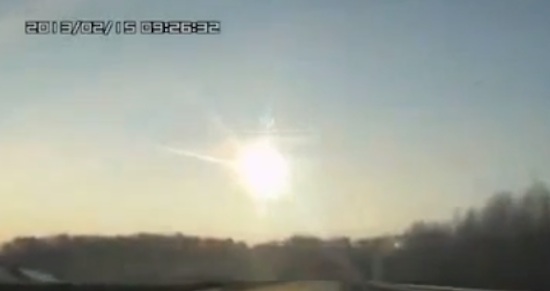 Now that the dust has settled from last Friday’s spectacular meteorite explosion over Russia, the facts are slowly coming in about just how big the explosion really was, and it’s turning out to be a bigger blast than pretty much anyone initially suspected. According to an assessment released today by the European Space Agency (ESA), the meteorite that fell to Earth in Russia’s Chelyabinsk region and injured nearly 1,000 people could have done much worse, as it exploded with the force of 30 atomic bombs.

Calculations by meteor researcher Peter Brown at the University of Western Ontario suggest that the when it hit the Earth’s atmosphere, the meteor was about 17 meters, or 56 feet, wide, and weighed in at somewhere between a 7,000 and 10,000 tons. More amazing than the sheer size of the rock, though, was the energy it released when it blew up in the sky over Chelyabinsk.

“It exploded with a force of nearly 500 kilotons of TNT – some 30 times the energy released by the Hiroshima atomic bomb – around 15–20 km above the ground.”

Brown also confirmed that most of the damage and injuries associated with the blast were caused by the cylindrical blast wave that accompanied the meteor’s descent and explosion, and noted that none of the damage seems to have been caused by an actual impact from a piece of the meteor. To which we say — really? Not even the collapsing roof at this zinc factory? Okay, I guess.

The one comforting piece of data to come out of Brown’s calculations, which were released this morning by the ESA, was that an event like this can be expected only once every hundred years or so. That’s nice to know, because we really don’t want to be around if the next meteor strike like this happens in a more populated area.