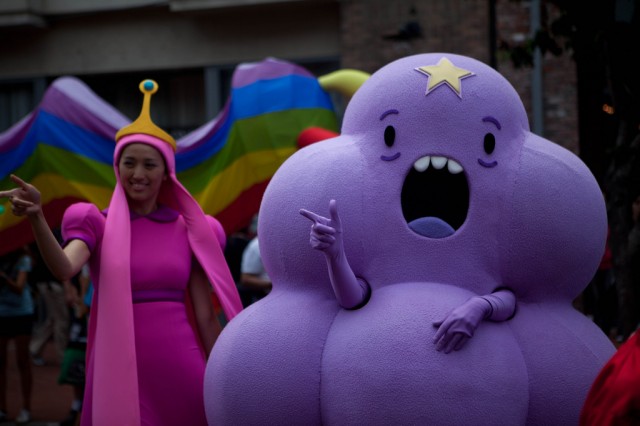 The Nintendo DS and 3DS game from WayForward, Adventure Time: Hey Ice King! Why’d You Steal Our Garbage?!!, was a bit slapdash, but overall entirely adorable. Short, sure, but fun. Cartoon Network and D3Publisher apparently heard the call for a longer, more expansive game, because it’s been announced that WayForward is now developing Adventure Time: Explore the Dungeon Because I DON’T KNOW! for Xbox 360, PlayStation 3, PC, and once again the Nintendo 3DS. Yeah, that’s a thing that’s happening.

Heralded as an action game, AT: EtDBIDK will feature a new storyline where Finn and a bunch of other characters, including Cinnamon Bun of all things, will have to explore “the mysteries surrounding a massive Secret Royal Dungeon deep below the Land of Ooo.” Also, it’ll have voices from the show, but it’s hard to say if that includes everyone or just the main folks like Finn and Jake.

The best part of this announcement? There’s going to be four-player co-op multiplayer. Yeah, you heard me: Four-player. Co-op. Multiplayer. Oh, and did we mention Pendleton Ward, creator of Adventure Time, will be once again teaming up with the good folks of WayForward on this title? Because yeah, that’s happening too.

I’m willing to reserve judgment on this, but it certainly sounds like the exact kind of thing I’d love to play.

(via Business Wire, image via Mooshuu)