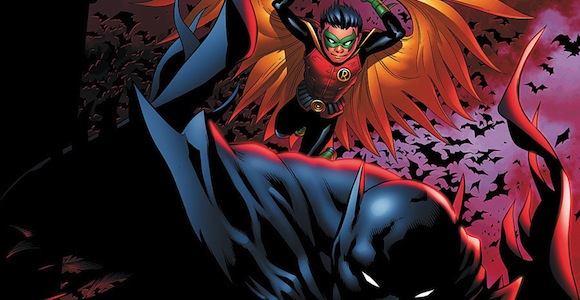 In this first issue of Batman and Robin, the main focus is the budding relationship between Bruce and Damian; both as a father and son, and as crime fighting partners. Expecting development primarily in Damian’s personality, I was surprised to find a great deal of growth in the character of Bruce Wayne. Coming into acceptance that he is now a father, Bruce is finally able to let go of the tragic death of his parents and begin to cherish the life they lived instead of focusing on how they died.

In order to symbolize this change in perspective, Bruce takes Damian to Crime Alley on the anniversary of his parents’ death, announcing that it will be for the last time, and that from now on, they will remember his parents by celebrating their wedding anniversary. Alluding to classic Batman (Adam West), the Batpoles are brought back into continuity, and an explanation is given as to why setting a grandfather clock at a certain time opens the hidden entrance to them. The action is this issue is limited and only acts as a precursor for a larger story that will deal, in some way, with Batman Inc. Exploring the new dynamics of the famous duo, Batman and Robin is written strongly, and promises a journey that will take the characters to new places. 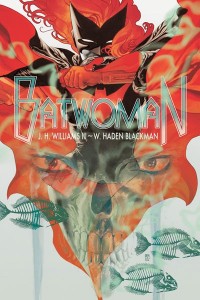 After six years of waiting, Batwoman has finally received her own title and it has been well worth the wait. Beautifully drawn, every page is a work of art. Flowing seamlessly, the art and dialouge mesh together to tell the story in an endless series of splashpages that feel like a lucid dream. The tightly knit connection between the art and writing allowed for the author to fill in the audience with the characters’ history, without bogging them down with excessive dialogue.

Answering a query posed by many fans, it is revealed that Renee Montoya does exist in this continuity. However, questions still remain as to her current status. The relationship between Batwoman and her cousin Flamebird is developing interestingly, and is a nice nod to the Golden age Batwoman and Batgirl. According to this issue, Flamebird is still a former Teen Titan. It’s impossible to know whether this means that the Teen Titans team that will be (re)-introduced later this month will not be the first one in the new continuity, or if this is just an artifact of Batomwan‘s original setting of pre-reboot continuity. Batwoman exemplifies what makes comics such an amazing and unique medium, and is one title that no one should miss. 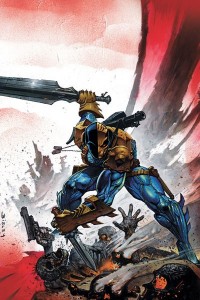 From the first line it’s made clear that the main point of this comic is to establish that Deathstroke is badass. In this endeavor it succeeds quite well. Deathstroke is depicted as a meciless mercenary who doesn’t like competition and always gets the job done. Well drawn, the issue is chock full of action, but not a lot of any real character development. Neither his connection to the Teen Titans nor his family are mentioned, leaving the story to focus simply on Deathstroke and how “badass” he is. Fans of Deathstroke, and bloody, action filled comics in general will love this title. 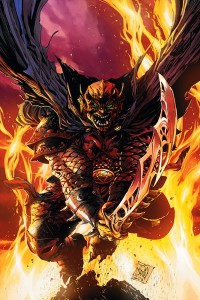 A spectacular swords and sorcery adventure, Demon Knights incorporates a great number of established DCU characters in a thrilling medieval era story. Seeing younger versions of time faring characters such as Shining Knight, Madame Xanadu, and Vandal Savage is an absolute treat and makes the new DC continuity seem more fleshed out. The love triangle between Jason Blood, Madame Xanadu, and Etrigan is intriguing and makes me wonder if Betty Ross and the Hulk have a similar relationship. An unexpected treat, Demon Knights puts you in a world of high adventure, and makes old characters seem new and more exciting than ever. 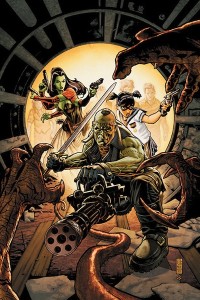 Combining a multitude of ideas, both new and old, Frankenstein, Agent of S.H.A.D.E. is a science fiction adventure with a very Hellboy-ish feel. The inclusion of the Creature Commandos adds significantly to the book, as does the involvement of Ray Palmer, who has not yet become the Atom, but still is able to manipulate the size of matter. Father Time, recently reincarnated as a domino masked pre-pubecent school girl, is an incredibly interesting character, whose caustic interaction with Frankenstein is sure will make for a great dynamic throughout the series. This new series has a lot of great ideas combined together, and if they can continue to mesh well together on a mothly basis, it will make for an excellent series. 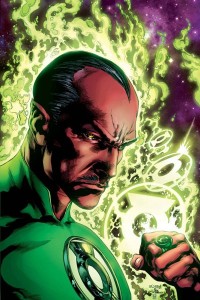 Despite being a #1, Green Lantern is not a restart, but instead simply a continuation of where the title had been progressing. However, the start of the new series works as a great jumping on point. The story opens up with Hal Jordan stripped of his ring, while Sinestro is forcibly re-instated in the Green Lantern Corp, for reasons yet unknown. Moving forward, the title promises to re-establsh the relationship between Hal Jordan and Sinestro, as well as to focus on Hal Jordan as a person. Although geared more towards fans familiar with the franchise, Green Lantern #1 is a very accessable read that breaks down well known characters and re-examines who they are. 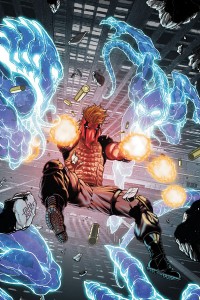 The first issue of Grifter offers up a new introduction to the character of Cole Cash. Focusing on his career as a con-man, the issue develops who the character is before he dons his mask, and works as the exposition for the birth of Grifter. Although the premiere issue is somewhat slow, it sets up a lot of plot threads that engage the audience and makes them want to pick up the next comic, where hopefully questions will be answered and more action will ensue. 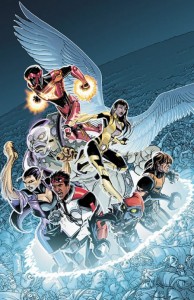 Unless you’re not a fan of Legion Lost previously,this title is not worth your time. In a generally un-interesting, hard to follow story, a multitude of characters are presented that you don’t have enough time to identify, let alone begin to care for. Although the team is clearly a part of the Legion of Superheroes, no attempt is made to identify or explain who or what the Legion is, leaving new readers in the dark. With a new continuity, DC had the perfect opportunity to revitalize the Legion franchise with a new title about the core team and it’s origins in the new univese, but instead they wasted our time with this throw away book. There is a nod to a “Flashpoint wall” in the story, but that is pretty much the only interesting thing in this book. 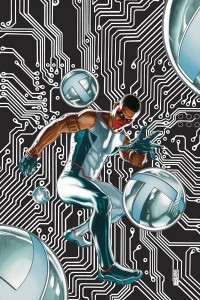 Known primarily for his association with the Justice Society of America, Mister Terrific is very interesting as a solo character, much more so than when part of an ensemble. The writer gives a good sense of depth and humanity to the character, while making his origin interesting, mysterious, and concise. One of the most notable aspects of this story is the inclusion of Kara Starr, who was formerly known as Terrific’s JSA ally, Powergirl. Whether Kara still retains power has yet to be seen, but akin to her most recent adaptations, she runs a billionaire dollar company and is very successful. However, I was upset to see her first introduced primarilly as the girl Michael was sleeping with; reducing her first appearance in this new continuity to being simply a buxom beauty wearing Mr. Terrific’s faux Lakers Jersey post coitus. The changes made to Terrific’s costume look… well, terrific; and the story is action packed enough, without becoming mindless. Although I was never a big fan of Mr. Terrific before, having him in a solo series has gotten my attention, and I look forward to reading more abou the character. 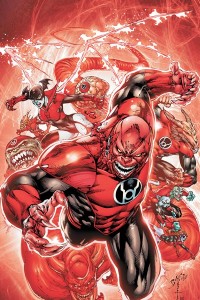 Keeping in line with Green Lantern #1, Red Lanterns #1 maintains the continuity established by Geoff Johns over the last couple years in the Green Lantern books. The previously established characters of Dex-star and Atrocious are presented as surprisingly relatable characters who, although consumed by rage, are sympathetic and somewhat altruistic characters. Atrocious’s backstory, coinciding with that of the red and green lanterns, is relatively accessable and understandable. Although an overall well written book, it is difficult to see where the storyline will progress, and whether the story will be enough to keep the title afloat when mixed in a sea of other Lantern books. 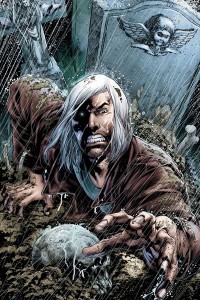 One of the most mysterious books to be released in the new 52, Resurrection Man is absolutely captivating. Reminiscent of The Fugitive, mixed with a hearty helping of supernatural elements, the story follows an enigmatic John Doe on the run from a mysterious organization, who has the ability to ressurect from the dead, each time being reborn with a new super power. The main character’s inner monologue is incredibly descriptive, conveying to the audience the impossible sensations he can feel. Maintaining it’s Vertigo roots, Ressurection Man is dark, deep, and keeps you captivated from the first page. 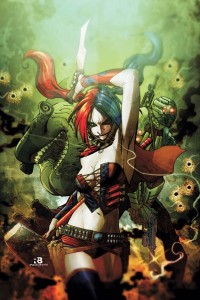 A good ensemble book, this new incarnation brings Suicide Squad back to it’s Task Force X roots, and makes the team tougher than ever. Updated in many ways, the issue provides new characters, new costumes, and in two cases new bodies. The introductions and backstories are woven in fluidly, allowing the reader to familiarize themselves with each member of the team, while still providing a thrilling story. Harley Quinn’s new costume, which apparently was meant to evoke Batman: Arkham Asylum, came out far too revealing. Other suspicious character changes are King Shark’s transition from one Street Shark to another, and Amanda Waller’s mysterious weight loss. Overall, the new Suicide Squad seems like an interesting group who’s tougher than ever, but unsettling decisions made by the creators leave me wary. 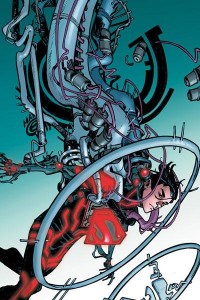 As a long time fan of Superboy, I will sorely miss the version of “The Kid” that came out of the ‘90s that I grew and matured alongside. However, after reading Superboy #1, I am excited for this new interpretation of the super cool clone. Although similarly grown in a lab, using an extraction of Superman’s DNA, I am doubful that Superboy’s origin will continue to correlate with the Reign of the Superman/Death of Superman continuity. Superboy has a far different personality than his past version; appearing closer in mannerisms to how he is presented in the Young Justice cartoon, or how Superman is shown in the Flashpoint title, Project Superman. Within the issue, there are noteworthy cameos by Rose Wilson and Caitlyn Fairchild, with an allusion to a possible relationship with Fairchild in the future. The end of the issue ties directly into the new Teen Titans title, once again paralleling Young Justice. Although this is not the Superboy I grew up with, he is still similar in many aspects. He still possesses tactile telekinesis, will become a member of the Teen Titans, and his genetic composition still plays a large role in molding his personality. Despite my preconcieved notions going in, I greatly enjoyed this title, and look forward to seeing this new Superboy grow and develop both in Teen Titans, and in his own book.