The DCnU Gives Amanda Waller One of Their Patented Sexy Redesigns: Yeah, You Heard Right 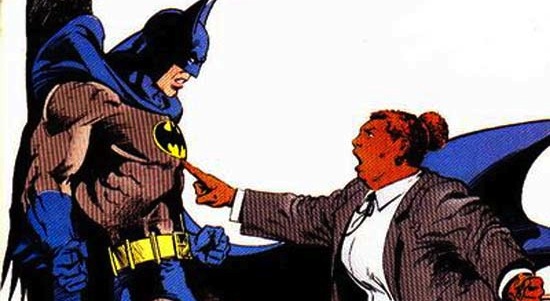 Very probably, you are getting tired of hearing complaints about the New 52. Zod knows I am getting tired of writing them. But it really does seem that for every wonderful group of minutes one can spend reading Batgirl, Batwoman or Demon Knights #1, in an equal number of minutes later you’re going to go on the internet and find out that in Suicide Squad #1, yes, the one with stripper Harley Quinn, Amanda Waller has had a complete redesign.

Here it is, on the left:

While I’ve never read much Suicide Squad or Secret Six, I have devoured the animated Justice League, in which Amanda “The Wall” Waller figures prominently… as one of the Justice League’s most dangerous and least touchable enemies. And naturally the most frightening thing about her was that in a sense she is absolutely right to think that the Justice League is a danger to humanity. Her existence in DC canon as a large and in charge badass woman of color who could even put Batman in his place warmed my heart. And a large part of the reason why was her physical stature.

It let me know that somebody out there (John Ostrander, Len Wein, and John Byrne) was brave (yes, brave in an industry that, twenty five years later, is still desperately clawing after the 18-34 year old male audience) enough to create a powerful female character in the DC Universe who appears to never worry that her relative physical attractiveness might change how much power or agency she recieves: if she wants power, she’ll take it on her own without requiring any kind of approval, even aesthetic, from those around her.

But you don’t have to take my word for it! Here’s what the internet has to say:

Which makes the decision to revamp the character – whether it was Glass and Rudy’s choice, or something dictated to them by DC head honchos Dan DiDio, Jim Lee and Geoff Johns – even more ill-considered than their decision to draw up a Suicide Girls-like character (seen at left) and call her Harley Quinn. What made Waller unique was that she really did look like a regular person – she just had enough of an iron will to maneuver herself into a position of power. For DC to seemingly transform her into one more skinny gal seems to be a particularly arbitrary choice in a company-wide relaunch that has already divided its’ existing fanbase.

Until Suicide Squad #1, by Adam Glass and Marco Rudy, Waller was one of the few prominent heavy-set characters in superhero comics. Rarer still, her weight wasn’t used for comic relief (like, say, Etta Candy in her earliest incarnations) or somehow connected to superpowers (as with Bouncing Boy, or Marvel’s Blob or Big Bertha). In a sea of ageless and impossibly thin and tall figures, Waller stood out as a squat, middle-aged force to be reckoned with.

And my favorite quote from Comics Alliance:

So what’s next, DC? Is the Penguin going to be skinny now, too? Perry White? Harvey Bullock?

(via Everybody, but also Katie C.)