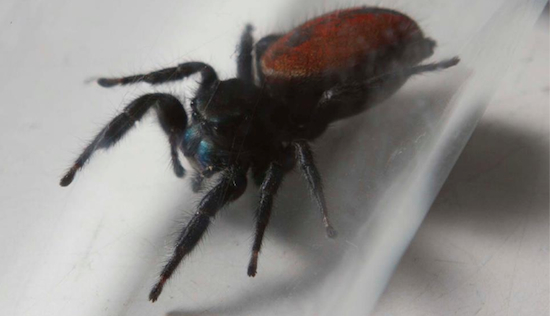 Ladies and gentlemen, today we mourn the loss of a real hero. With a lump in our throats and a tear in our eye, the Smithsonian’s National Museum of Natural History announced that their resident space-traveling red-backed jumping spider, Nefertiti, passed away yesterday, five days after returning from a 100-day and 42-million-mile journey to the International Space Station. We promised ourselves we wouldn’t cry, but here come the waterworks.

Nefertiti, or “Neffi” as she was affectionately called by fellow arachnids and close associates, was the brave volunteer in a bold experiment — spearheaded by 18-year-old student Amr Mohamed of Alexandria, Egypt — to monitor the adaptation of her hunting techniques when placed in a microgravity environment. Needless to say that it was an overwhelming success and opened so many doors in the field of putting stuff in space to see what happens after 100 days.

Upon returning home and moving in to her new habitat within the NMNH’s Insect Zoo, Nefertiti passed away five days later after her debut on November 29th. The museum assures the bereaved that her death was entirely from natural causes and not the result of the rigors of returning from lengthy space travel. Although, regrettably, she had died at the young age of 10 months, as opposed to the year-long lifespan common among her kind.

Even though her life was cut much too short and largely unexpected, Nefertiti dared to dream and, quite literally, reached for the stars. We miss you already, Neffi.