Liam Neeson, Will Ferrell, & More Added To Voice Cast Of Lego: The Piece of Resistance 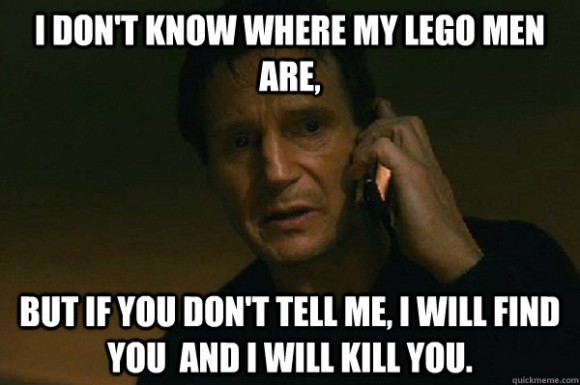 For the record, I didn’t have to create this image, IT ALREADY EXISTED ON THE INTERNET.

There’s nothing like a good voice cast and now LEGO: The Piece of Resistence (actual title) has both Liam Neeson and Morgan Freeman in it, I’m totally sold.

Neeson, comedian Will Ferrell, Nick Offerman (Ron Swanson!) and Community’s Alison Brie have now joined the cast which already included Chris Pratt, Elizabeth Banks, and Will Arnett (playing Batman). Deadline gives an update on the plot and what the new actors will be doing:

The plot follows Emmet (Pratt), an ordinary, rules-following, perfectly average Lego minifigure who is mistakenly identified as the most extraordinary person and the key to saving the world. He is drafted into a fellowship of strangers on an epic quest to stop an evil tyrant. Ferrell will play Emmet’s primary adversary, President Business; Neeson is the president’s powerful henchman, Bad Cop; Offerman is a craggy, swaggering pirate obsessed with revenge on President Business; and Brie is a member of Emmet’s team with a powerful secret.

President Business? Bad Cop? This couldn’t be more amazing. Also, I hope Brie turns out to be Wonder Woman or something.

(via Deadline, image via QuickMeme)