Asking a bunch of college kids NOT to do something? How could that possibly backfire? 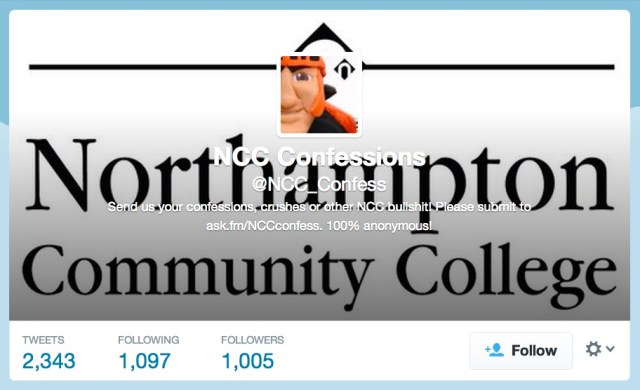 The president of Northampton Community College in Pennsylvania doesn’t think the @NCC_Confess Twitter account is very funny, so he tried to have it pulled from the Internet. That went about as well as you would expect and resulted in a lot more attention for the account. Do they not have a class in How to Internet at NCC?

“Confessions” accounts are nothing new. They work by letting members of a community, often a school, send anonymous confessions that get shared publicly. Here’s a quick sample of some of the gems on @NCC_Confess:

I didn’t say it was high art. School president Dr. Mark Erickson was none too impressed when he learned about what he calls the “Twitter posting site NCC confessions.” Erickson sent a letter out to the college community telling students that he’s asked Twitter to remove the site, but that he’s “not optimistic that will happen,” because of course it won’t. All Erickson has done is pour gas on the fire, and @NCC_Confess seems grateful for the attention.

Shoutout to Prez Erickson for hypin up a brothers twitter! Thanks man! — NCC Confessions (@NCC_Confess) April 1, 2014

Erickson expressed his concerns in his letter to the college. He wrote, “I am concerned that members of this community would engage in activity that is racist, sexist, bullying and hurtful to other members of the NCC family.” The letter seems to have gotten somewhat of a positive reaction from the operator of @NCC_Confess who posted the following shortly after the letter from Erickson was sent:

To respect the school, y’all gotta start being nice. I won’t post it if it’s cruel, racist or downright disrespectful. Sorry guys.

So what’s the lesson here? If there’s a small Twitter account you’d like to see go away, don’t email thousands of people and tell them about it, dude. If Northampton Community College has a course in social media, maybe President Erickson should sit in for a classes.

(via Lehigh Valley With Love, image via @NCC_Confess)