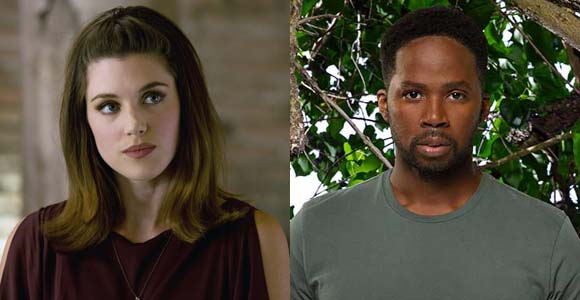 The cast of NBC’s upcoming Constantine pilot has just expanded by three.

Deadline says True Blood‘s Lucy Griffiths, Lost‘s Harold Perrineau, and Charles Halford will be making magic together on the comic adaptation. We recently learned Matt Ryan would be taking on the lead role of John Constantine. Here’s their character descriptions:

When Liv (Griffiths), the daughter of a late friend, is targeted by demons, Constantine steps in to save her. Griffiths’ Liv is an offbeat young woman tired of her ordinary life who comes to discover that she has the ability of seeing the supernatural world among us, which makes her a key player in the battle between good and evil. Liv teams up with Constantine to save lives, master her power, and learn more about her late father.

That’s similar to Rachel Weisz’s role in the 2005 film adaptation but it’s nice to see the series isn’t going to be giving Constantine all the special powers. Another interesting thing to note is the character name Liv, which just happens to be the same as the name-changed lead in The CW’s iZombie comic adaptation.

Perrineau will play Manny, an authoritative angel assigned to watch over Constantine who has the power to step into other people’s bodies, and although he is meant only to observe, Manny will not hesitate to help out if he can save a life.

And then Halford is set to play Chas, previously played by Shia LaBeouf in the film, described as, “Constantine’s oldest friend and staunch companion who possesses powerful survival skills that might possibly be supernatural.”

Just earlier today we posted a story of original Constantine co-creator Stephen Bissette and his criticisms of DC/Warner Bros. treatment of creators when it comes to adaptations.