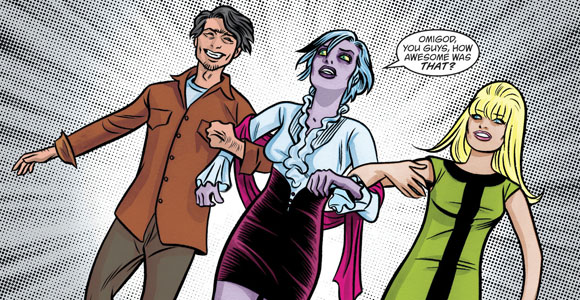 We were pretty excited to hear The CW was working on adapting the Vertigo Comics title iZombie with none other than Veronica Mars creator Rob Thomas. Now we’re finally getting some casting details which include an actor from Once Upon a Time.

Deadline is reporting three names joining the series, although we’re still in the dark on the main star. Alexandra Krosney (Last Man Standing), Malcolm Goodwin (Breakout Kings), and David Anders (Alias) will be rounding out the cast. I am supremely excited to hear Anders will be involved. I adored him as Sark on Alias and there hasn’t been nearly enough of him as Dr. Whale on Once Upon a Time.

So who will they be playing? You’ll have to remove yourself from the source material a bit.

iZombie is a supernatural crime procedural that centers on Liv, a med student-turned-zombie who takes a job in the coroner’s office to gain access to the brains she must reluctantly eat to maintain her humanity, but with each brain she consumes, she inherits the corpse’s memories. With the help of her medical examiner boss and a police detective (Goodwin), she solves homicide cases in order to quiet the disturbing voices in her head. Goodwin’s Clive is a detective who recently received a promotion from vice to homicide but has been floundering for his first two months and is in desperate need of making a case. Though dubious at first about Liv’s “psychic” powers, she demonstrates too much accuracy for him not to take her seriously. Krosney plays Peyton, Liv’s best friend and roommate who is baffled by Liv’s recent behavior and feels like they’re drifting apart. Anders cast plays the show’s bad guy Blaine, an entitled rich kid who bites off more than he can chew in the drug business.

In the comics by Chris Roberson and Mike Allred, the main character’s name is Gwen (as a fan, I loathe unnecessary changes like that) and she works as a gravedigger, not at a coroner’s office. Her best friends are a ghost and a were-terrier. There’s also some fun monster hunters who show up along the way. Sad to see they aren’t sticking closer to that story considering the network isn’t new to supernatural fair but at least she’s still an honest-to-goodness zombie.

Who would you like to see play Liv/Gwen? We previously threw Kristen Bell’s name out there.