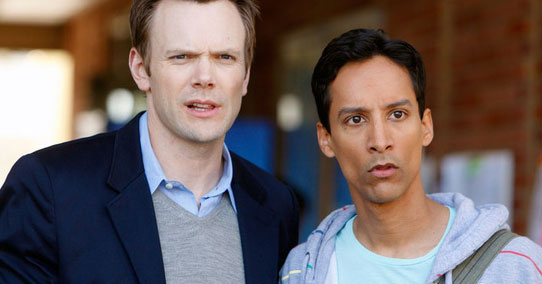 Well, this is a strange development. NBC has announced its schedule for the 2012-2013 season, and as we learned last week, Community has been renewed (along with Parks and Recreation and 30 Rock, which will likely end its run in 2013), albeit with a shorter season. (Which is not necessarily a bad thing.) What was also renewed, and what also has people seriously scratching their heads, was the widely reviled Whitney. But what’s even curiouser is that NBC has announced that they’ll not only be moving Community to Fridays, but pairing it with Whitney.

I think it’s fair to say that NBC might be trying to slowly murder Community, don’t you think?

This is a pretty mean move by NBC, if you ask me. We all know that Fridays are not what they were in the ’90s, when missing ABC‘s “TGIF” lineup of family-friendly sitcoms was considered a mortal sin. Now, Friday is where shows go to die. Basically, NBC just made Iron Man (Community, to air at 8:30 PM) strap himself to a nuke (Whitney, to air at 8:00 PM) expecting both to just explode into oblivion and never be heard from again. Hopefully, Iron Man will break away and survive while the other follows through with said explosion.

If NBC was so worried about Community‘s ratings, then why would they move it to an even less ratings-friendly night with a widely hated show? Because they’re not worried about its ratings. They don’t care anymore. They don’t want it to exist, but they don’t want to be the assholes who canceled a fan favorite prematurely.

UNLESS — this was a way to end the David and Goliath competition between Community and The Big Bang Theory on CBS, which has been regularly kicking the former’s ass in the ratings. Maybe taking away that kind of element would allow more attention to be paid to Community as a show instead of a competitor, and it could last on NBC beyond this abbreviated fourth season, which may have just barely been granted by the network.

First impression: This seems like it sucks. But maybe there is a silver lining to this in the end.