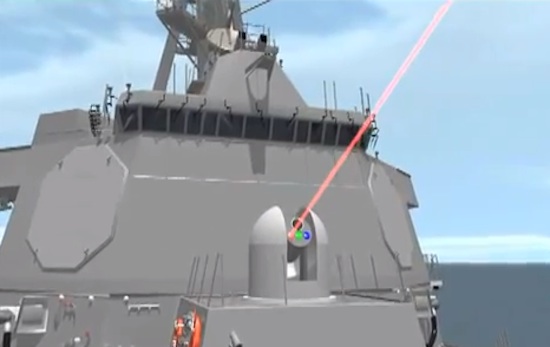 After years and billions of dollars spent in development, the Navy’s Laser Weapon System (LaWS) has been deemed ready for primetime, meaning the directed-energy weapons will start making appearances on the decks of U.S. military ships beginning next year. The solid-state laser, which will make stage its coming out on the USS Ponce, is still in it prototype stage, and isn’t yet capable of eliminating a missile or enemy jet, but Navy officials are confident that it could disable other ships, and as for drones…well, you can see it blasting one out of the air during a test in the video below.

While the laser system is currently less effective than a traditional missile, it is also less expensive, costing just $1 every time it fires a beam of directed energy at a target, according to Chief of Naval Research Admiral Matthew Klunder. In the future, the Navy officials hope the weapons could allow ships to carry less explosives and gunpowder on board, which are dangerous things to have on a ship for reasons I hope I don’t have to explain.

In addition to its lack of power, the laser system looks like it may have trouble operating in foggy or rainy conditions, according to a report by the Congressional Research Center issued last month. The hope is that some of those issues can start being ironed out during live tests once the system is operating on board the Ponce. After all, you don’t really know what you’ve got until you start using it in the field. That said, we do know what we’ve got can zap a drone out of the sky, as you can see in this short demonstration.

And now that the future has arrived, this reporter has never been so close to signing up to serve in the Navy. Not because of any excess of bravado or patriotism — I love my country about as much as the next guy, but am a devoted, card-carrying coward — but because it might get me the chance to play with a laser cannon. I just hope they can’t court martial anyone for yelling “Pew Pew Pew!” while firing it.