Nathan Fillion Does Not Want To Be Your Batman 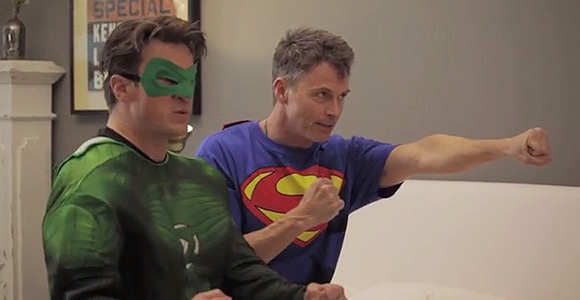 Who will be the next Batman? We don’t know but it probably won’t be Nathan Fillion.

While many assume Fillion taking on a major, live-action superhero role is only a matter of time considering his friendship with Joss Whedon, we now know to rule out The Dark Knight. Entertainment Weekly engaged the Castle star in a little “what if” scenario recently:

“I wonder if my throat could take it,” he said, joking that he doesn’t believe he has the vocal stamina to mimic Batman’s gravelly voice. “I think I’d make an excellent Bruce Wayne; I think I’d make a terrible Batman.”

I’m not sure I see him playing either side of the coin but then again, I’m a Batman snob. Fillion has previously voiced Green Lantern Hal Jordan in a few DC animated films as well as Steve Trevor in the fantastic Wonder Woman animated feature.

But Fillion has a few words of caution for us folks who like to fan-cast  roles.

“If you wanted to see a particular person as Batman, I think one of the worst things you could do is shove it down someone’s throat as far as the new director of Batman or the new producers of Batman,” he said. “Probably the worst thing you could do if there’s someone you want to be Batman is sort of rally.”

So I guess this means I should stop sending Thorin beards to the Warner Bros. offices in order to get Richard Armitage the part? Or the stuffed werewolves for Joe Manganiello?

(via Entertainment Weekly, image via The Daly Show)