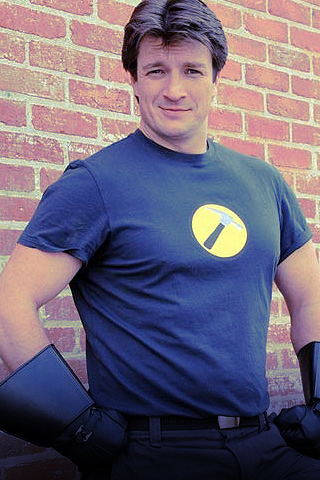 It seems like we’re not getting any more Firefly, but that doesn’t mean we can’t see Nathan Fillion and Joss Whedon team up again, does it? Nathan Fillion has been involved in multiple superhero projects in his time, from playing Captain Hammer in Dr. Horrible’s Sing Along Blog to voicing DC’s Green Lantern in various Justice League and Green Lantern cartoons. But given the many Big Damn Heroes Fillion has played, it’s surprising he has never portrayed a Marvel Superhero, especially considering his friendship with Whedon.  It turns out, Fillion has thought about the prospect of a Marvel role, and recently answered an inquiry about it in an interview for Pixar’s Monsters University.

Unfortunately it seems that Fillion and Whedon are both too busy to collaborate on a Marvel project at the moment. Fillion quickly shot down any hopes of him in a Marvel role for several years in a recent interview with IGN, saying:

“Well right now I’m still pretty tied up with Castle. I have a couple years of that to go. We’re having a great time, we’re telling some great stories and we’re enjoying it. Hard to shake a stick at success. Joss and James…have done so much for me, I’m not the guy that goes knocking at their door and goes, ‘Do some more for me!’ You know what I mean?…They’re doing great stuff right now and I’m having a great time right now, so I think that once I wrap up Castle, and we get a little more free time one our hands… [Nods]”

Even if Fillion isn’t playing a Marvel character, he’s a very busy man, and we can look forward to him in Castle, Monsters University, and even as Hermes Percy Jackson: Sea of Monsters. Plus, while Fillion’s quote quashes rumors of him in a Marvel role any time soon, Fillion seems fairly optimistic about collaborating with Whedon again once they both have more time, whether in one of the many Marvel projects Whedon is tied up in or in something else entirely. After all, both men have found time in the past to work together on smaller works like Dr. Horrible’s Sing Along Blog and the recently released Much Ado About Nothing.

If Fillion were to appear in a Marvel work, I wonder who he would play?  While others have suggested a Marvel superhero, I personally would love to see Fillion in the role of a villain, in the lines of his turn on Buffy the Vampire Slayer.