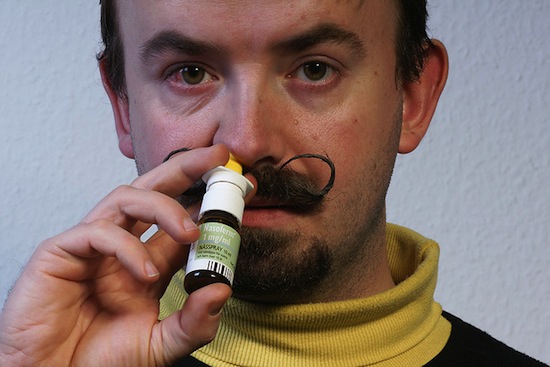 Throwing up into your own helmet sounds like one of the worst things an Astronaut can do. Think about it: Assuming the spray doesn’t bounce back off the face-glass into your eyes, it’s still going to drip down your suit and everything is going to smell terrible until you get a chance to clean it. I don’t know if they have dry cleaning equipment on the international space station, but even if they do I’m guessing the smell’s going to stick with you. Not wanting to leave their people in a lurch, NASA has commissioned the development of a nasal spray designed to rapidly suppress motion sickness in astronauts.

Not that it’s a big surprise, but motion sickness is actually a huge problem for astronauts. According to NASA, about half of Astronauts sent into space experience some amount of motion sickness. Admittedly, rocketing out of the atmosphere at high speeds in zero gravity seems like the perfect combination to induce spontaneous vomiting.

Created by California-based pharmaceutical company Epiomed Therapeutics, intranasal scopolamine  — INSCOP, for short — works exactly like you think it would: One spritz and your woozy, nauseous feelings disappear! The company experimented tablets, patches, and injection, but found that shooting medicine up your nose worked more quickly than any other method.

The cure may be on its way, but it’s still going to be awhile astronauts can stop worrying about getting the dizzies on shuttle missions. NASA and Epiomed are in the process of perfecting INSCOP formulas designed as instant and long-term treatments for motion sickness. Once they do, Epiomed still has to get the drug approved by the FDA before it can be used in the field. In the meantime, Epiomed will be testing the drug as a cure for sea-sickness for the U.S. Navy. That seems like a good idea, right?