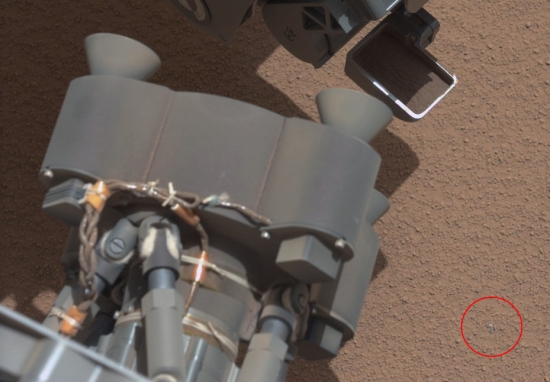 One might think that NASA would be excited to examine the first scoop of soil that they’ve retrieved using the Curiosity rover that spectacularly landed itself on Mars not that long ago. Instead, NASA’s next focus appears to be on the partially-visible shiny object in the foreground of the above image. Even NASA themselves admit that it might just be a bit of rover hardware, but they’re going to give it a thorough examination anyway.

NASA explains the image and their next steps:

This image from the right Mast Camera (Mastcam) of NASA’s Mars rover Curiosity shows a scoop full of sand and dust lifted by the rover’s first use of the scoop on its robotic arm. In the foreground, near the bottom of the image, a bright object is visible on the ground. The object might be a piece of rover hardware.

This image was taken during the mission’s 61st Martian day, or sol (Oct. 7, 2012), the same sol as the first scooping. After examining Sol 61 imaging, the rover team decided to refrain from using the arm on Sol 62 (Oct. 8). Instead, the rover was instructed to acquire additional imaging of the bright object, on Sol 62, to aid the team in assessing possible impact, if any, to sampling activities.

See? And they said science wasn’t exciting. We found a shiny thing that might just be a part of the craft that noticed it in the first place.