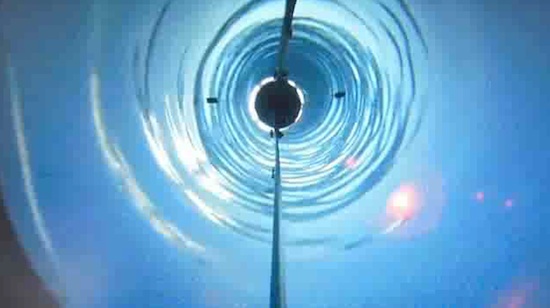 As excited as we are to watch the launch of the latest SpaceX capsule this morning — you can watch live with us right here, by the way — that’s not the only news NASA has in store today. While the space agency is helping the Dragon spacecraft get up to the International Space Station, another NASA team is releasing footage from deep beneath Antarctica. Now you can get a load of some of the first images of the bottom of a subglacial lake courtesy of a robotic mini-submarine designed by researchers at NASA’s Jet Propulsion Laboratory in the video below.

The baseball bat-sized submarine can be seen descending into an 800 foot deep borehole cut in the Antarctic ice above late mast month. Though it’s small, NASA has plenty of experience cramming lots of sensors into not much space, and the Micro-Submersible Lake Exploration Device — apparently cool acronyms are reserved for NASA gadgets that go into space — can get a closer look at the geologic, hydrologic, and chemical characteristics of Lake Whillans, which is normally sealed below the Antarctic ice.

On just it’s first trip under the ice, the sub already turned up evidence that the lake is surprisingly shallow — just over a meter and a half deep, rather than the 10 or so meters researchers expected to have to plumb, making Whillans less of a “subglacial lake” and more a “subglacial kiddie pool.”

Hit play on the video below to get a breakdown from project lead Alberto Behar of the technology behind the robotic sub and the grueling process that went into launching it — not to mention an unprecedented look at a part of the Earth only now being opened up to human eyes.