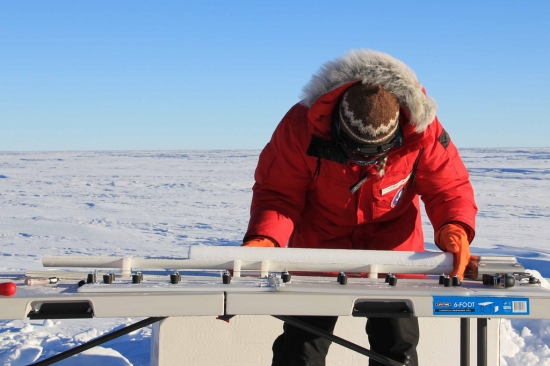 A team of American researchers at Lake Whillans in Antarctica have discovered the first signs of microbial life deep below the surface of the ice. The evidence hasn’t been officially declared to be life, but the team says it looks promising. It has passed initial tests, and is undergoing more scrutiny before the researchers can really pop the champagne and start high-fiving each other. It’s too early to know if the microbes are the frozen alien parasite from the X-Files episode “Ice,” but time will tell.

The team drilled down half a mile to pull water up from Lake Whillans. Preliminary tests found cells in the water sample, and they responded to DNA-sensitive dye. Those are both good signs that there could be life. Samples of the water were also put in conditions that would allow any living microbes in the water to grow. That’s the test of which the team is waiting to see the results. If nothing grows, then they can’t claim to have found life.

It’s not as simple as claiming the opposite though — that if cells grow then there is life below the ice. A Russian team drilling into Lake Vostok believed they found living organisms in the lake, but it now seems that the cells originated in the drilling fluid they used to obtain the sample, not from the lake itself.

If the cells the Lake Whillans team has found are alive, they are most likely surviving on pockets of oxygen trapped under the ice and “feeding” off iron and sulfur deposits. This would result in sulfuric acid being produced, that in turn releases more minerals from the sand and sediments in the lake in a process called “weathering.” The presence of these minerals doesn’t necessarily mean there is life, but it could be further evidence to support the findings.

Searching for life in extreme conditions on Earth can help scientists get a better idea of where to look for life on other planets, and whether or not it’s even possible. Other research that tried to simulate Martian conditions to test how well E. coli and other bacteria could survive have proven promising that signs of life could be discovered on Mars.

(Discover Magazine via The Verge, image via NASA ICE)