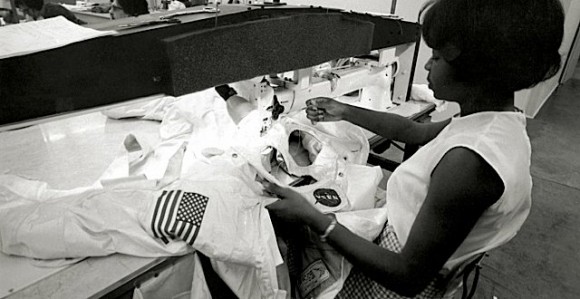 Of all the bits of untold history floating around out there, this one’s a pretty cool look behind the scenes of one of the processes that have kept so many astronauts alive over the years. Hazel Fellows (pictured above), along with many other women, was a seamstress with the International Latex Corporation, and played an instrumental part in creating the now-iconic space suit.

The International Latex Corporation–known better now as Playtex, creators of so many bras and girdles–wasn’t largely known as the company behind the suit because nobody was allowed to put their logo on anything. Also, according to Nicholas de Monchaux–an architecture professor who recently released a book about the design process–“It was all a unified effort. By the same token, within the larger culture of the military industrial complex that NASA was a part of, having a girdle manufacturer was, if not embarrassing, than certainly less than totally expected.”

In an interview with Txchnologist, de Monchaux boasts the incredible amount of time, talent, and energy it took these women to design and perfect the suit.

Txchnologist: Your book is a history of the spacesuit that shows how, in the midst of NASA’s mania for systems engineering, this technical device was created largely by seamstresses.

Nicholas de Monchaux: They had to sew to a 1/64th of an inch tolerance without using any pins. So there was no question that it was kind of a couture handicraft object versus something made according to more conventional military industrial principles.

De Monchaux spends no small amount of time telling the world about how wondrous the job these women did was, and how undersold they’ve been for all these years.

Txch: Do you think that the Playtex seamstresses are the unsung heroes of the early space program?

NdM: In my imagination they certainly are. Like few others in the whole process, they really had the lives of the astronauts literally in their hands. They had a skill and dedication that was unparalleled. The same women have made U.S. space suits all the way up to the shuttle and space station era, so the skill is by no means obsolete….That’s where you have Playtex drawing on a very different corpus of expertise [than NASA’s engineers]: on couture sewing, on garment assembly, on stitching and biasing and all of the very different and special modes of expertise that fashion has always had in designing for the body.