NASA is Rushing the Next Step to Give the Moon a Moon, Orion Capsule to Launch in 2014 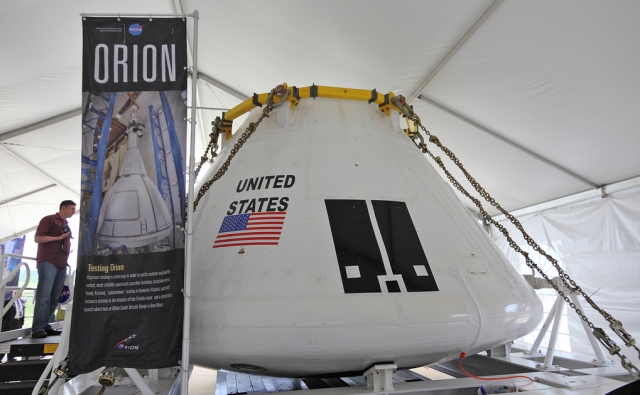 NASA has a plan to wrangle an asteroid and park it in lunar orbit, or as we’ve come to know it — the plan to to give the Moon a moon. One step in that plan is to send astronauts into space to visit the Moon’s moon, and to do that, they’ll need the Orion space capsule. To kickstart the mission, NASA has set an inaugural launch date for the Orion of September 2014, and they’ve been working double shifts to meet that goal. Why the rush? It might be that the whole plan could get scrapped if the proposed NASA budget doesn’t get approved.

The Orion capsule is being built at Kennedy Space Center by contractors from Lockheed Martin. Jules Schneider, Orion project manager at Lockheed, said that a growing number of skilled employees are working two shifts per day, seven days a week to meet the launch date. Hopefully they’re rotating them out and not just working them to death while a huge drum plays in the background

Having the Orion ready for September 2014 is ambitious, and ahead of schedule. Maybe NASA is trying to get as much done on the Moon’s moon project as possible as quickly as possible to keep itself on track to snag an asteroid. There is currently a bill being rehashed in Congress by Republican Representative Bill Posey of Florida to shift NASA’s focus away from the asteroid plan, and towards building a permanent installation on the Moon.

Building a moon base conflicts with statements made in recent weeks by NASA administrator Charles Bolden, who said that NASA would not be leading manned missions to the Moon again in his lifetime. This implies NASA is more interested in sticking with its current goals than dropping them to pursue new ones, and at the risk of sounding like I don’t want there to be a moon base, I agree with Bolden. NASA won’t be able to achieve any goals if those goals keep changing.

The launch set for September of 2014 is hopefully far enough in the future that the White House and Congress will have time to settle the current budget disputes before getting themselves into a new round of budget disputes, which are now officially the new great American pastime, but NASA isn’t waiting that long to show off their progress. They hope to power up the Orion for the first time in the summer of 2013, says Orion Production Operations Manager Scott Wilson.

The new pace of the mission could put astronauts at the Moon’s moon asteroid by 2021, four years ahead of President Obama’s goal of 2025. Maybe then we can get to work on getting Representative Posey his moon base. One cool thing moon thing at a time, Representative Posey.

(via Universe Today, image via Madbuster75)