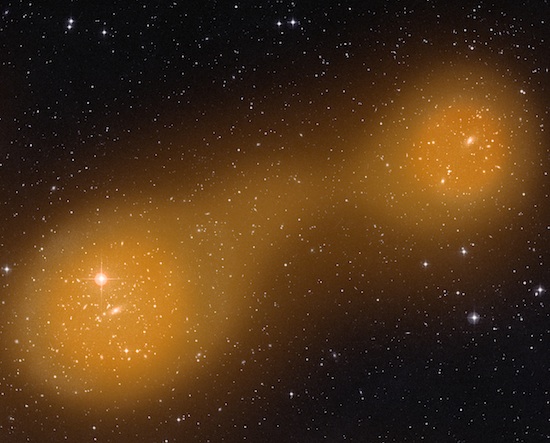 The European Space Agency’s (ESA) Planck Space Telescope has laid it’s super-powerful eye in the sky on a never before seen cosmic phenomenon. The photo above is Planck’s first image of a pair of galaxy clusters connected by a cloud of superheated gasses that spans a mind-boggling distance of 10 million lightyears. No word yet on if this actually represents the Asgardian Rainbow Bridge of Thor fame, so in the absence of good evidence, we’re just going to really, really hope so.

The Planck Telescope’s mission is to search for the oldest sources of light in the universe, and hopefully help us learn more about how the universe took shape by doing so. During it’s search for that light energy — known as Cosmic Microwave Background, or CMB — the Planck also sees objects that interact in odd ways with this ancient light. Case in point, this 10-million-light year bridge between the galaxy clusters known as Abell 399 and Abell 401, which makes miracles of human engineering like the Golden Gate Bridge look positively dinky by comparison — sorry, San Francisco.

The cloud of gas connecting the two galaxy clusters seems to be about as warm as the gas surrounding them, measuring a positively toasty 80 million degrees celsius. The discovery of the gas bridge also marks the first time researchers have used readings of the Sunyaev–Zel’dovich (SZ) effect to identify not just galaxy clusters, but the filaments of hot gas that connect them. The proof that far-off group of galaxies can be connected by vast stretches of gas could help researchers learn about how these clusters formed, and what sort of energy they’re giving off during their lifespans.