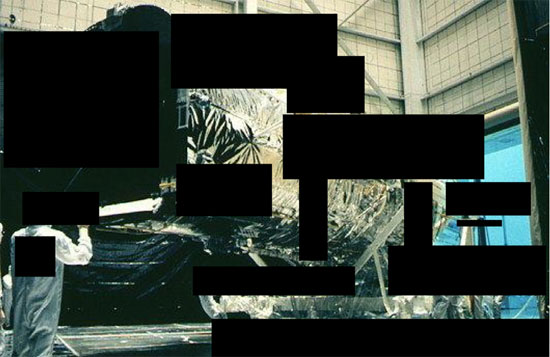 NASA budgets are famously quite tight, and the space agency’s science programs have been under particular strain as of late. At issue is the James Webb Space Telescope, which has been plagued by delays and cost overruns, and has generally made it hard for NASA to do science under budget. Thankfully, the National Reconnaissance Office just happened to have two high-end secret space telescopes sitting around in Rochester, New York, and now they’re giving them to NASA.

Described as looking like shorter, stouter Hubble telescopes, the pair were built in the late 1990s and early 2000 and were never launched nor intended to look out into space. Instead, the pair were meant to look down on Earth from above. According to the Washington Post, experts on civilian and intelligence spacecraft believe that the telescopes in question could be KH-11 KENNAN telescopes. A hilariously redacted photo of a KH-11 in a cleanroom is presented above.

While NASA has graciously accepted the gifts, the situation raises a lot of questions. First is why the NRO would be willing to part with the spacecraft in the first place. The report from the Post sings the praises of the spy satellites, saying that they have similarly-sized mirrors to the Hubble but were built more recently making them lighter and more advanced. They also have a wider field of view than the Hubble and a maneuverable second mirror, giving the telescopes a more focused view.

In the report, co-chair of the National Academies of Science committee on astronomy and astrophysics David Spergel comes right out and says that the pair are, “actually better than the Hubble.”

Though the NRO has remained tight-lipped about why they’re in such a charitable mood, it seems likely that their change of heart was fairly recent. According to Wikipedia, an attempt to replace the KH-11’s failed in 2005. What’s more, the satellites appear to be capable of remaining in orbit for five to ten years and three have been launched since 2001, the most recent in 2011. This means that there are still some up there, and other platforms — like the USAF’s secret-ish X-37B spaceplane — may been recently tapped to take their place.

For NASA, the trouble now is figuring out if the space agency can afford to launch one or both of the satellites. Both of the telescopes have functioning mirrors but lack cameras and other necessary components before they could be launched. What’s more, NASA currently has no ground staff or resources allocated to run the satellites.

Though NASA astrophysics director Paul Hertz expressed enthusiasm to the Post about the telescopes, he did point out the agency’s budget woes. If NASA uses the money it has under its current budget, one of the telescopes could be in orbit by 2024. If Congress steps in and provides full funding for one telescope, it could be flying by 2019.

That said, it’s good to see that these (no doubt expensive) satellites might get some use. And with the oft-delayed Webb telescope hoping for a 2018 launch date, NASA now has more options for more science. Money aside, that’s a good problem to have.

(The Washington Post via The Verge, image of KH-11 assembly via Wikipedia)