DARPA is Developing a Spy Satellite to Stream Real-Time Video, See Any Target 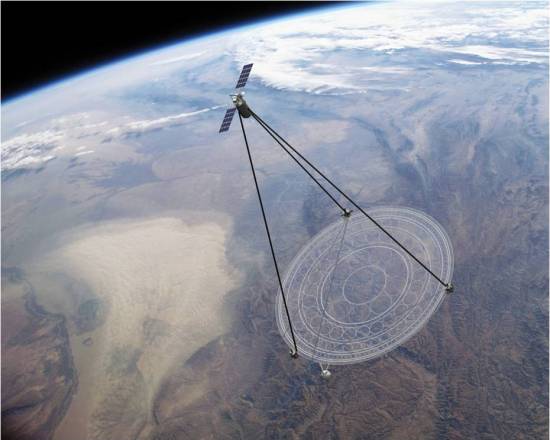 As is the case with most projects coming out of the Defense Advanced Research Projects Agency, or DARPA, this starts simple and quickly becomes complicated. Here’s the simple part: Currently, military planners rely on drones to get real-time information about battlefields or areas of interest. Now things get complicated, as there aren’t enough drones and they don’t fly high enough to enter what DARPA calls “denied territories.” In order to bridge that gap, DARPA makes it really complicated by researching the possibility of capturing video from space using spy satellites fitted with enormous flexible lenses some 60 feet across.

The project is called MOIRE, for Membrane Optical Imager for Real-Time Exploitation. While still a long way away from flying in space, the program is a bold one and features some surprising new technologies. The most ingenious of these is, no doubt, the enormous membrane lens proposed for the satellite.

While NASA and defense agencies have long used telescopes to look out at the universe and down at intelligence targets, they’ve always snapped still images. Moreover, the difficulties in creating the high-quality optics, and then getting them into space intact is a logistical nightmare. Take, for example, the early troubles with the Hubble Space Telescope. By using a flexible, lightweight membrane instead of traditional glass optics on geo-synchronous satellites, DARPA hopes to circumvent those problems.

Were it to be launched, the membrane would be extended from the satellite using an as-yet undesigned system for holding it taught. Once unfurled, specific diffractive patterns etched into the surface of the membrane would focus the light onto the spacecraft’s sensor, giving it a sharp view of the ground below. So sharp, in fact, that it would be able to spot a missile launcher moving at 60 MPH, with resolution better than 10 feet per pixel.

Each of these spacecraft would cost some $500 million for each spacecraft, and would be able to provide video at roughly one frame per second. That’s not exactly stunning quality, to be sure. However, it’s far better than anything a spy satellite can currently do.

Though MOIRE spacecraft are still a ways off, DARPA is actively developing the program. It’s already given Northrop Grumman a $43 million contract to continue research into the MOIRE project. It’s also tapped Bell Aerospace to experiment with a 16 foot version of the membrane, with plans for a 32 foot wide prototype sometime in the future. Maybe that’s what the X-37B has been up to…?

Relavant to your interests