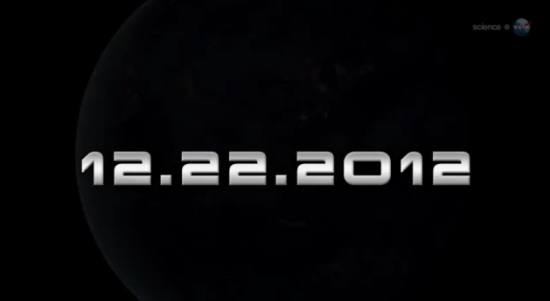 Friday’s the big day! December 21st, 2012. The day we supposedly all die as foretold by ancient Mayan prophecy. Except that it wasn’t actually foretold by a prophecy, and we’ll all be fine. Well, statistically, some of us won’t be fine, but the world as a whole won’t end. So says NASA, so say we all. NASA is so confident the world won’t end on 12/21/12 that they’ve already released a video from the future to explain why didn’t all die. That takes courage, but it’s not like there will be anyone left alive to call them on it if they’re wrong.

The video is titled “ScienceCasts: Why the World Didn’t End Yesterday.” If it were up to us “DON’T PANIC!” would have been thrown in there as well, but that’s just us. In it, Dr. John Carlson, who is the director of the Center for Archaeoastronomy, calls the whole 2012 doomsday prophecy a “misconception from the very beginning. The Maya calendar did not end on Dec. 21, 2012, and there were no Maya prophecies foretelling the end of the world on that date.”

In the video, NASA compares the Maya Long Count Calendar to the manual odometer in a car. When the odometer reads 99,999 miles, and then goes one mile more, it ticks over to 00,000 and starts over, but that doesn’t mean the car explodes.

December 21, 2012 is the day that the Maya Long Count Calendar will “roll over” and start again, but Carlson says there is nothing supporting the idea that the Mayans believed this would mark the end of the world. Other NASA scientists debunk specific end-of-the-world scenarios like an asteroid or rogue planet smashing into the Earth. You can see the full video here:

We’re more than willing to take NASA’s word on this, so we don’t think the world will end on Friday, but if they have access to videos from the future then things could easily turn into a Back to the Future II-esque alternate reality where NASA uses their knowledge of the future to open a casino and marry our moms, and that could be even worse than the world ending.