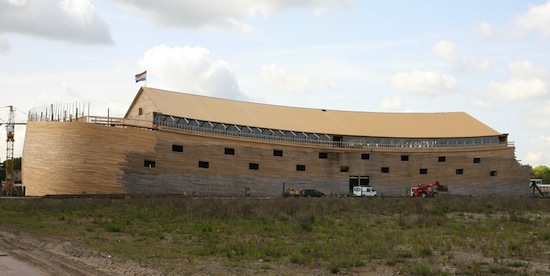 Well, folks, it looks like the December 2012 Mayan apocalypse that seemed so far off is gradually bearing down on us. It’s just aching to tear our world asunder, or at least that’s the case according to ancient hearsay. While some of us are disregarding it as yet another phony Y2K scare, one man in China, Lu Zhenghai, isn’t taking chances. Like a latter-day Noah, he built himself an ark of sorts because, apparently, there’s going to be a flood.

Instead of investing his life savings in something more practical for apocalyptic preparation like, say, canned food, firearms, and ammo, Lu convinced himself that Earth would meet its untimely end at the hands of a catastrophic flood. This obviously meant constructing a boat, above all things, was paramount. Mail Online has the details:

Lu’s masterwork may not exactly be aesthetically pleasing, but it was built to save lives — not make some pretentious statement. That’s assuming there’s actually a flood. See images of Lu’s ship for yourself and decide whether it was worth the money and effort.