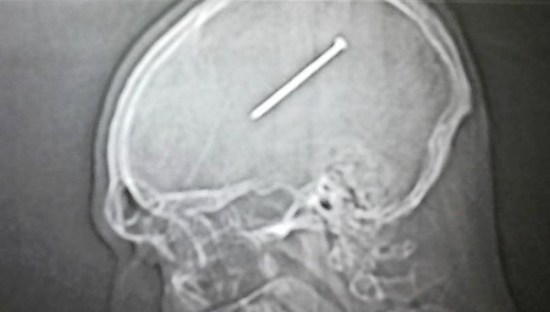 Dante Autullo was working on a ladder in his Orland Park garage when he lost control of a nail gun and accidentally smacked it against his head. He texted a photo of the small scratch on his scalp to his fiance Gail Glaenzer, and thought nothing more of it. He went about his business driving a plow truck for some eight hours, and even dropped off his kids for a play rehearsal. It wasn’t until waking up nauseous from a nap that he was taken to Advocate Christ Medical Center and a three and a half inch nail was found lodged in his brain.

Some 36 hours after introducing nail to brain, the two were once again parted in a two hour brain surgery. Dr. Leslie Schaffer told the Chicago Tribune that despite the shocking discovery, Autullo is expected to have little if any lasting effects.

That might be hard to believe given the dramatic X-Ray image pictured above. However, the nail entered the brain high on the back-right side of Autullo’s head. The head of the nail remained lodged in the skull just beneath the skin of his scalp, as if it had been shot into a piece of wood. Because of the direction Autullo is facing in the X-Ray, the nail only appears to be suspended in the middle of Autullo’s head.

To remove the nail, Schaffer drilled two holes on either side of the nail’s head. He then pulled the nail straight out along with a small piece of skull surrounding the nail. Luckily for Autullo, the nail entered cleanly and did not send any bone fragments into his brain. Once the surgery was complete, Schaffer patched up Autullo’s head with mesh and a titanium plate.

Autullo was clearly a lucky man to not only survive his accident, but to walk away with no apparent complications. Thankfully, it seems his life will not be following the tragic path laid by Phineas Gage. Hopefully Autullo will be a little more careful with his power tools from now on.