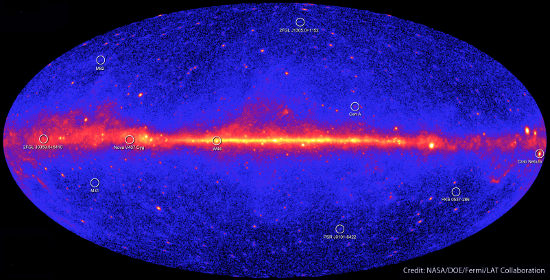 Researchers have found something surprising amongst the 1,873 gamma ray sources spotted by NASA’s Fermi Gamma Ray Space Telescope. While about 1,200-odd sources are pretty standard, scientists have no clue as to what is producing some 600 sources of gamma rays.

Given the high-energy nature of gamma rays, nearly all of the possible answers to this puzzle are dramatic on a massive scale. Pulsars, massive collapsed stars that shine gamma rays from opposite sides as they spin, are well known sources of gamma rays, as are black holes which produce the energy as a product of consuming huge amounts of mass. The collision of galaxies creates huge shock waves that could also be responsible for producing at least some of the gamma ray bursts, but there’s another more tantalizing possibility: Dark matter.

Dark matter, like the Force, could be the stuff that holds the universe together. Because matter makes up a surprisingly small amount of the universe, objects like distant galaxies should fling themselves apart since the gravity of that mass is insufficient to hold them together. However, if there were another form of matter that we couldn’t see but exerted gravity on the universe, then that would explain our current predicament. Despite accounting for some 85 percent of the gravitational mass in the universe, if the theory is correct, dark matter has lived up to its name and has yet to be observed. This is where Fermi comes in.

An extension of the theories around dark matter is the possibility that dark matter behaves more or less like regular matter, and will be annhilated in a burst of energy when it encounters anti-dark matter particles. (I know this is starting to sound like a bad Star Trek fanfic, but bear with me.) If that’s the case, then some of these unexplained blips in Fermi’s vision could be massive clouds of dark matter bouncing around through space.

Of course, it might not be. People have been searching for dark matter for quite some time and have yet to find anything. In fact, some have posited that dark matter might not even exist and that physicists will have to head back to the drawing board. But with 600 mystery sources and fresh scans of the entire sky every three hours from Fermi, scientists now have their work cut out for them. Even if dark matter isn’t the cause of these mystery gamma rays, something is — and it’s probably something pretty damn interesting. I can’t wait.