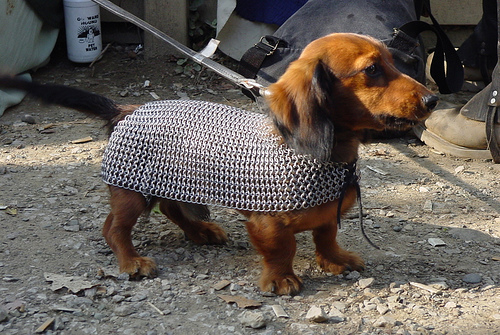 In the ancient and medieval worlds, before firearms became prevalent, armies employed dogs to strike fear into the hearts of their foes. The ancient Romans had whole companies comprised of vicious dogs, which were often starved before battle and equipped with knife-covered collars and anklets. And according to The New Dog Encyclopedia, “During the Middle Ages, dogs were armored as completely as the knights and their charging horses. Suits of canine armor — plate, chain and canvas — were worn into battle and for the chase.” We’re guessing none were as cute as this guy, though.

(I Heart Dachshunds via BuzzFeed)