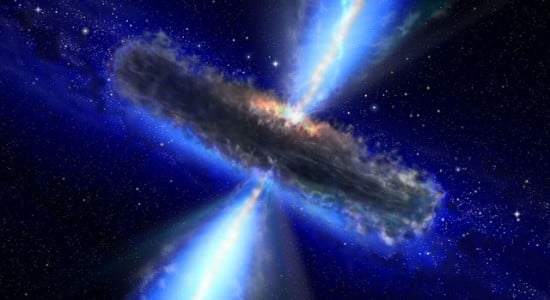 Two teams working with researchers from the California Institute of Technology have discovered the largest mass of water yet observed. The gaseous, watery cloud was spotted around the quasar APM 08279+5255 some 30 billion trillion miles from Earth. And yes, there will be a lot more “-illions” used before the end of this post.

The water surrounding the quasar is in the form of vapor, but taken all together it is about 140 trillion times the amount of water in Earth’s oceans and is 100,000 times more massive than our sun. Because the quasar is so far away, its light has taken 12 billion years to reach Earth. This fantastic distance gives scientists a unique look at what the universe looked like when it was a mere 1.6 billion years old. (For reference, NASA estimates that the universe is about 13.7 billion years old.) Interestingly, water is not uncommon throughout the universe, though the amount of water around this quasar alone is estimated to be 4,000 times the water in the Milky Way.

At the heart of the quasar is massive black hole, about 20 billion times the size of our sun. As the black hole consumes matter, it spits out the equivalent energy as a thousand trillion suns. Much of this energy is in the form of X-Rays and infrared radiation, which scientists were able to observe. From their analysis, they’ve been able to learn about how the quasar interacts with the surrounding mass of water and other gasses.

Scientists were also able to determine that there is enough gas currently spinning around the quasar to feed the black hole until it swells to six times its current size. But that may not be the fate for this cosmic cloud. Because the gas is spinning so quickly, there’s a chance that it could be spun off or, more spectacularly, could ignite and become a star itself.

Scientists will just have to keep watching, and waiting, to find out.