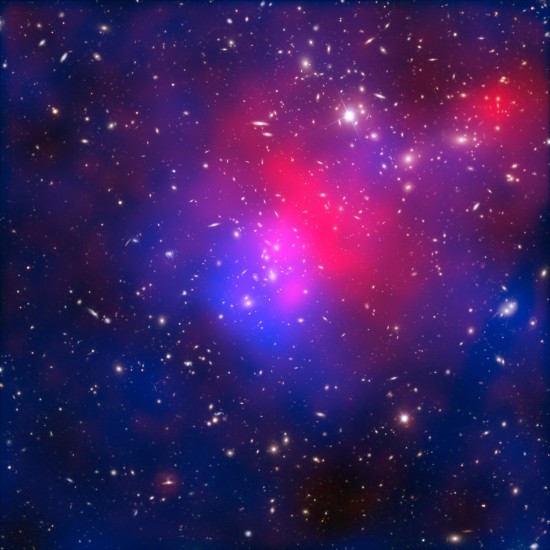 An epic tale of space history is just coming to light, as new images pieced together by several different telescopes around the world and in space show that the galaxy cluster Abell 2744, more colloquially known as Pandora’s Cluster, was formed by a massive cosmic collision of at least four separate galaxy clusters.

The cluster’s history is both complex and violent, with the extreme crash that brought the galaxy clusters together occurring over a span of 350 million years. The galaxies themselves make up less than 5 percent of the mass of the cluster itself. The gas, which makes up around 20 percent, is emitted as X-rays (shown in the above image in red). The remaining 75 percent of the cluster is made of dark matter (shown in the image in blue). Dark matter does not emit, absorb, or reflect light so the best way to detect its presence is by tracking its apparent gravitational attraction.

To study the dark matter formed in the wake of the Abell 2744 collision, researchers relied on a phenomenon called gravitational lensing. This occurs when light rays from distant galaxies are bent as they pass through the gravitational field of another galaxy cluster. The resulting distortions in the images generated by various telescopes showed researchers that the dark matter was present and allowed them to map it within the galaxy cluster.

The course of the epic collision was pieced together using telescopes in space and on the ground including the Hubble Space Telescope, the European Southern Observatory’s Very Large Telescope, the Japanese Subaru telescope, and NASA’s Chandra X-ray Observatory.

An animation of the events that created the Abell 2744 cluster, created by the European Southern Observatory, can be viewed here.

(via New Scientist, photograph via NASA)