My Hero Academia? Three Musketeers? What Is Happening?!

Whatever it is I'm excited! Plus Ultra!!! 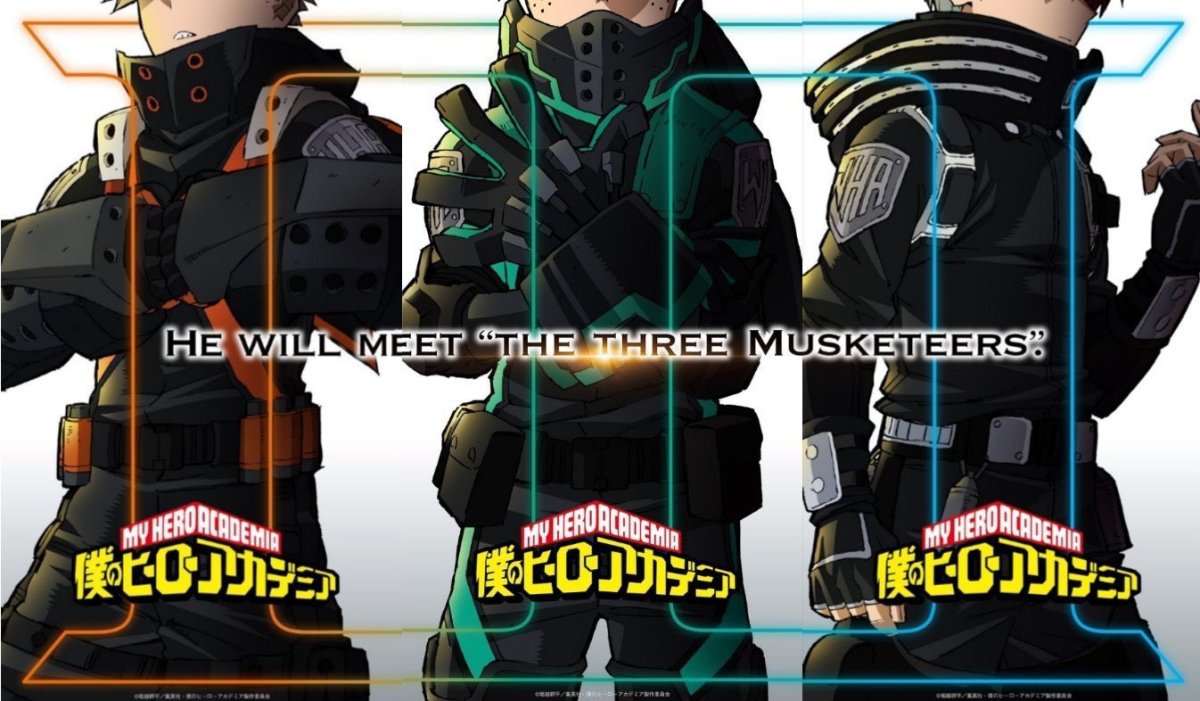 I always come into work with a plan on what to talk about, but it tends to get derailed by the daily ongoings of the entertainment industry. In this case, my plans have been interrupted by three tweets by three official Japanese accounts for My Hero Academia. Anyone who knows me knows that I dabble in the Plus Ultra, and by “dabble” I mean “I got married in a Deku themed dress last year complete with red tennis shoes.”

So when these tweets hit my timeline last night I was excited, especially when fans immediately put the message (and accompanying images when you went to the sites) together. Here are the tweets:

And to save you the trouble (since it doesn’t look like the link takes you to the images anymore) the three pictures together formed the image featured in this piece, but here’s the tweet:

My “I have to write coherent thoughts down” response is coming… after I scream some more because OMG!!!

All right, here we go!

The execution of this reminds me of when your favorite pop culture icon casually drops a new project with no warning. Not only that, the accounts launched partial news and let the fans put 2 and 2 together on their own. Except … nothing was announced. We got the sentence “he will meet the three musketeers” and pictures of Bakugo, Deku, and Todoroki in new outfits with the roman numeral for “3” overlapped with their images. That’s it. We technically don’t know what this project is, but fans are speculating that it’s a 3rd movie.

It’s me. I’m fans. I’m running on the same assumption.

It should be noted that the posts came from the official Japanese accounts for the My Hero Academia anime series, movie, and manga. The anime series is gearing up for a 5th season next year and the manga is absolutely W I L D right now, so it wouldn’t be that far off for a movie to join the fray. The movies are … sort of canon? Most anime movies tend to stray from canon, but there are some canon elements in the My Hero Academia films (especially Heroes Rising if you know what to look for).

This has led me to coming up with all sorts of headcanons, the biggest one being that this is gonna be some vigilante take on our heroes. This isn’t just because of the three musketeers angle (since they’d fall more in line with being a group of vigilantes), but because I kinda think the manga is leading us toward someone becoming a vigilante.

There’s already a vigilantes side manga in the My Hero Academia universe with plot threads that connect to the main series, and it’s clear that hero society NEEDS to be reformed, so I wouldn’t be surprised if one of our mains walks away from UA to become a vigilante.

My money’s on Todoroki.

There’s WAY too much going on with his family right now for him to be okay with hero society once the dust settles. He’s already disagreed with how things work before, which is something Deku understands since he was a part of it, too (the Stain arc). If you add all of that with Todoroki’s backstory AND the current manga arc, then it’s not too farfetched to think that he’s gonna do things his own way after this. Maybe this is something a movie will tap into? Since Bakugo and Deku are there, too? The fandom has taken to deeming them as the next in line to be “The Big 3” in UA so I’m not at all surprised to see them in this kind of image.

Lord, I’m forever amused that out of these three boys BAKUGO is the most straight-laced of them all. If Todoroki goes rogue you know Deku’s gonna waffle between supporting his friend and his obligations as an up and coming hero. Meanwhile, Bakugo’s gonna tag along to make sure these idiots don’t get themselves killed. Maybe he’ll deny his feelings, but depending on where this potential movie lines up with the manga, maybe he won’t.

Still … I’m wondering who this “he” is that is being referred to. “He will meet the Three Musketeers.” Who? Who is he? Is it All for One? That’d make sense, too, since, “One for all, and all for one,” is the catchphrase for the musketeers AND the main powers at play in My Hero Academia.

What are your thoughts? I’m thinking we’ll get more answers once Jump Festa rolls around in December. Are you excited for a 3rd movie (assuming that’s what this is) and what are your theories about what these images mean?