Deku is the name of a hero (who needs help) 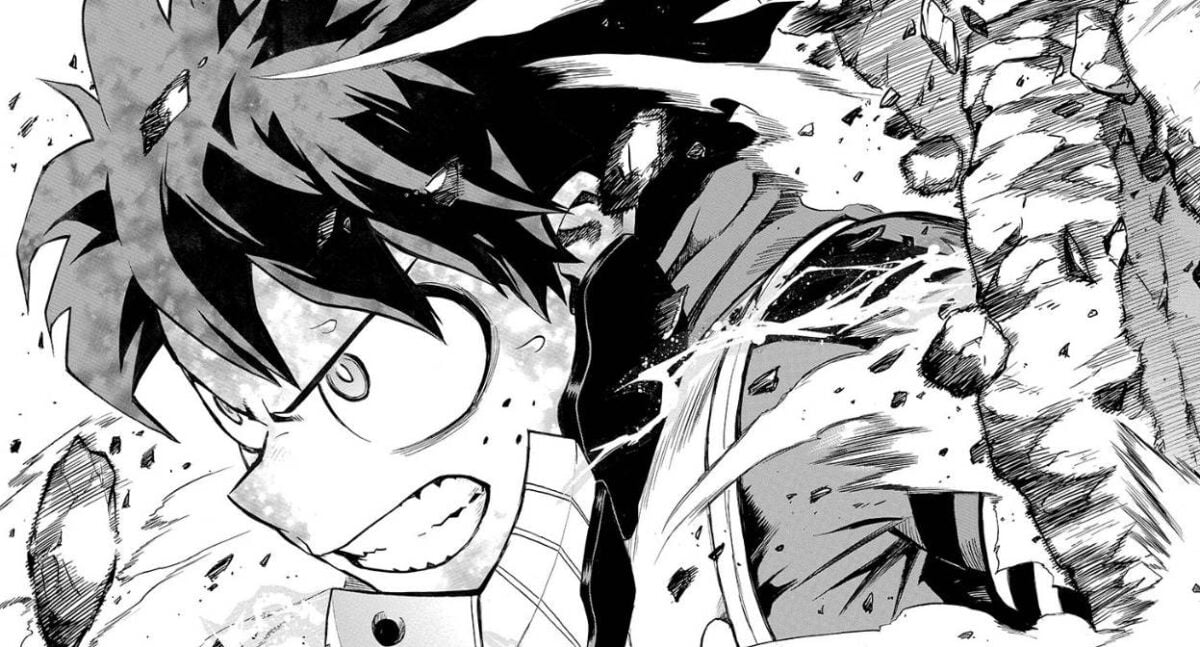 Spoilers from My Hero Academia chapter 317 (and previous chapters)

I know that it’s normal for shonen anime protagonists to go all out.

What’s really interesting to me when it comes to Young Midoriya and his self-destructive behavior is that not only has it been a major red flag since the beginning, but it’s been labeled by some (both in the series and in fandom) as a positive because “You have to push past your limits in order to be a real hero.”

Then All Might, the mentor who introduced that mantra to Deku realized, kinda late in the game, that maaaaaybe encouraging a child who just got superpowers yesterday to go beyond isn’t the best idea.

Maybe, instead, that child should be encouraged to do what he can right now versus going beyond to the point that he’s barely even recognizable anymore. 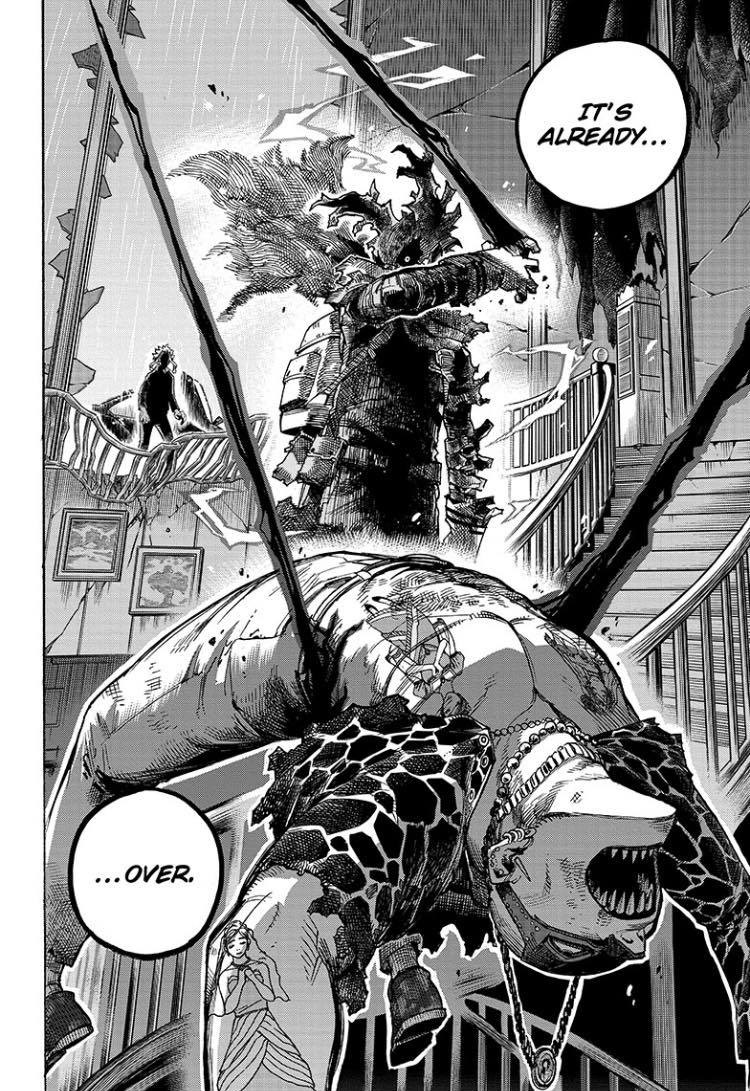 Gee. I think someone else said that at the beginning of the damn series.

But Deku’s always been like this, you know? Running into danger without a second thought. Accepting tasks without fully questioning how they could be a detriment to his own well-being. Training too quickly to the point of hurting himself because he feels like he’s got years to make up for since he didn’t have a quirk before. He has moments of beating himself up if he has to rely on others instead of being able to handle situations himself. He never realizes his own growth because he thinks he’s not moving fast enough, or he thinks that his growth is because others keep helping him out, therefore, he didn’t earn it himself.

These are all things that are, generally, seen as positive staples, not just in shonen anime, but in hero media in general. You’re supposed to push past your limits to win the day, and for a while, I thought there’d be no repercussions because My Hero Academia is a series that has characters with insta-heal abilities who are on standby during giant tournament arcs where characters tear themselves to pieces.

We’re getting all of those repercussions now, and not just physical ones, but major emotional ones that show the consequences of adolescents who happily take the entire world and place it on their shoulders. 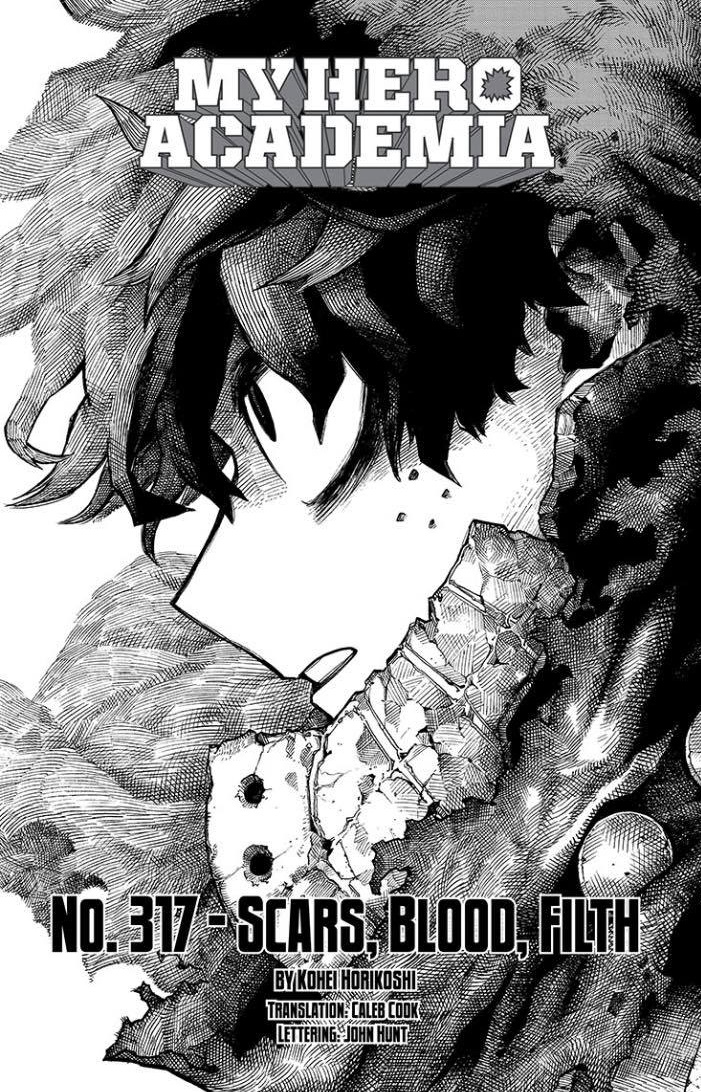 My Hero Academia, to me, especially now, is a story that’s taking that “work harder than hard” mentality and showing how hazardous it can be to your health. It’s kinda a perfect message for this series, especially when it’s in the middle of back-to-back arcs that uncover the flaws in hero society in a way that can no longer be ignored. We’re currently in an arc where citizens don’t trust heroes, heroes are stepping down because they can’t take the criticism, and our optimistic protagonist who took being a hero at face value has gone from this: 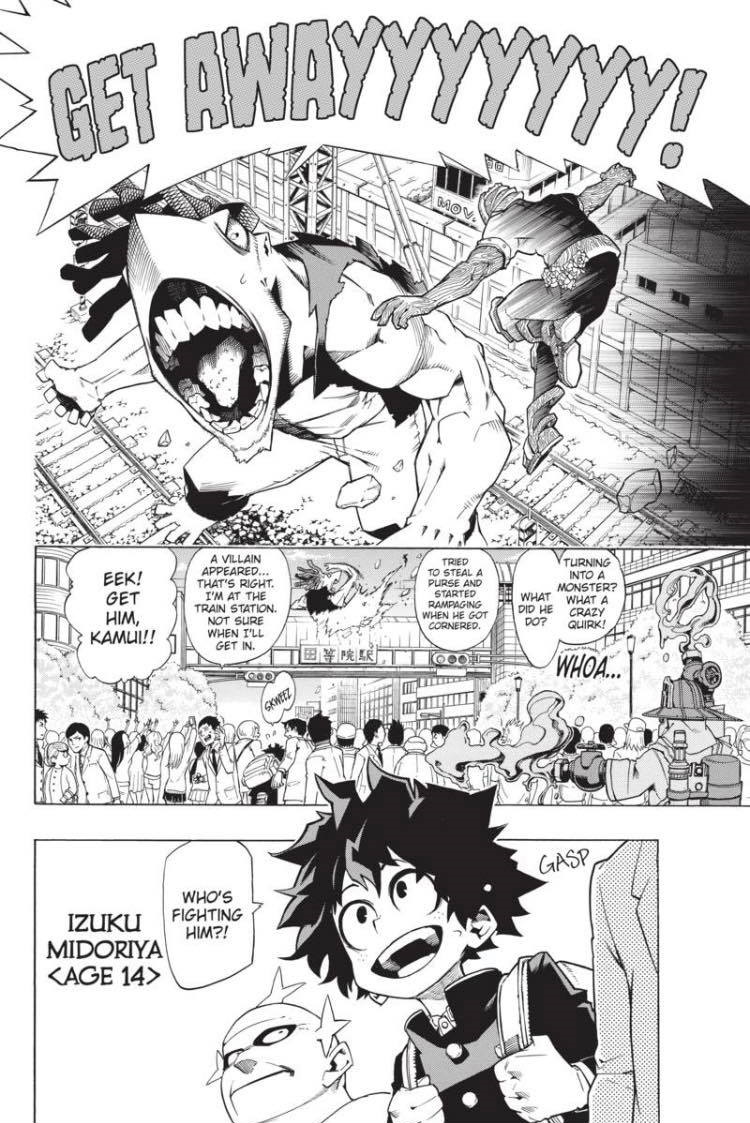 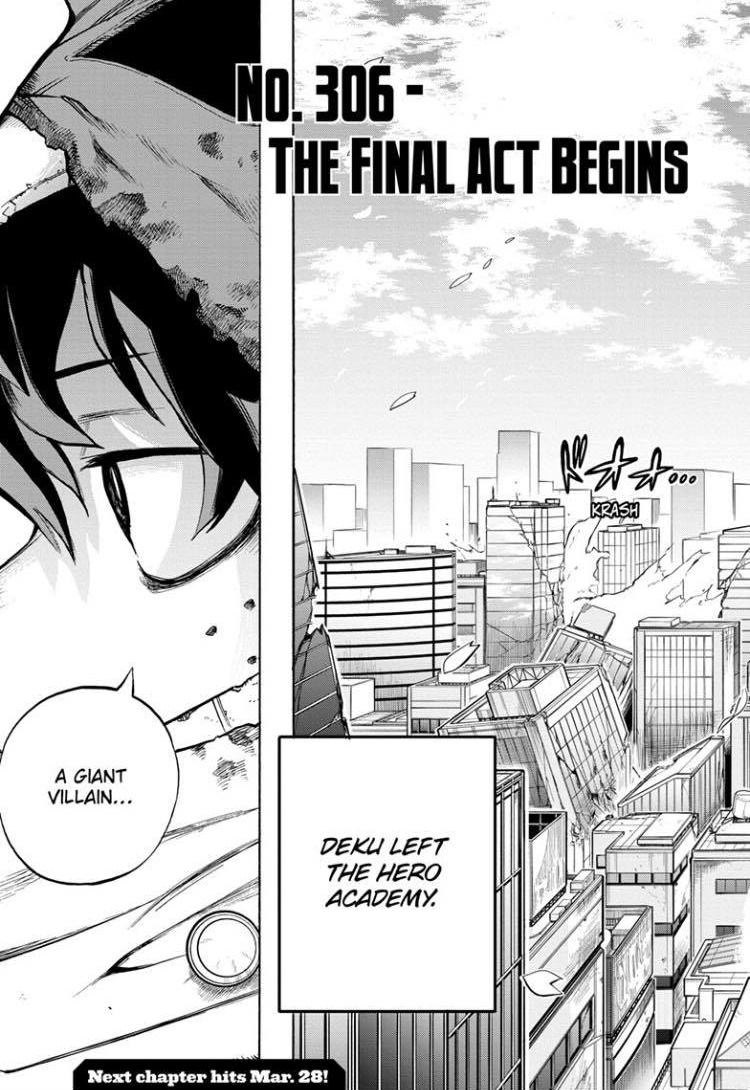 I will say, having Deku playing off of a loud, literally explosive rival did a lot to hide the fact that Deku, himself, is the biggest threat to his own well-being. Between the two of them, Bakugo is the one who gets labeled as being irrational, his actions making him the perfect scapegoat for who the reckless one of the duo is.

But you know what? It’s not Bakugo who’s the most unstable.

It always has been Deku.

It doesn’t look like it due to Bakugo’s brash personality, but he’s always been the one with the most common sense and the one to call out the major issues with the way Deku goes about doing things. 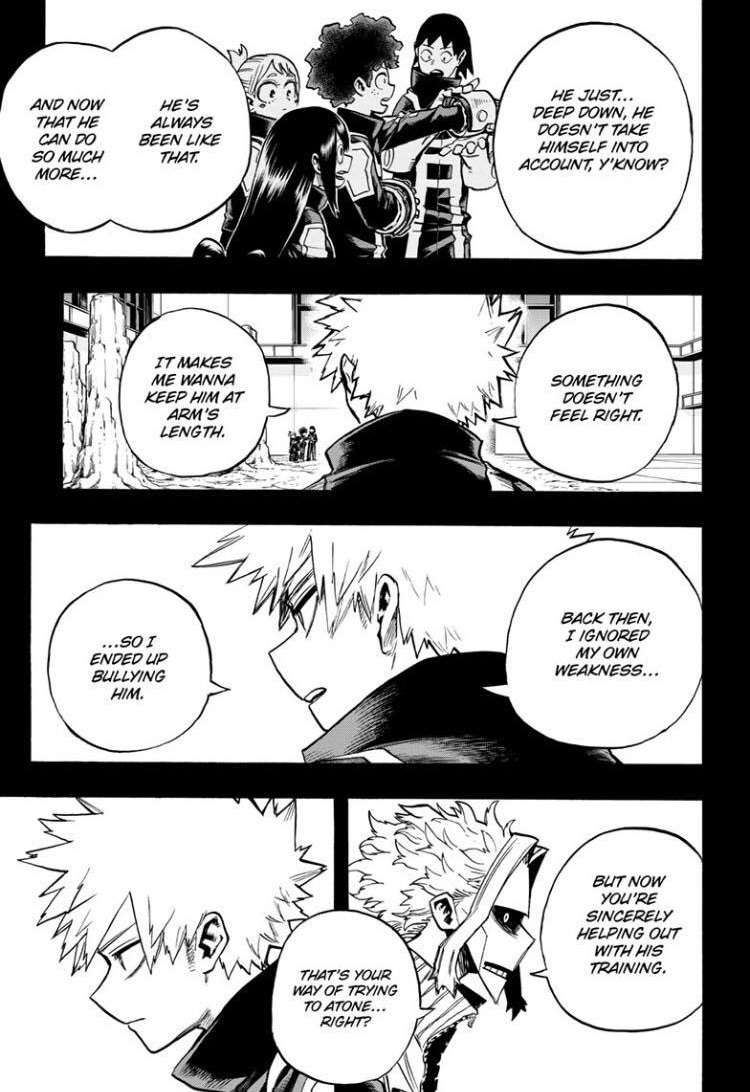 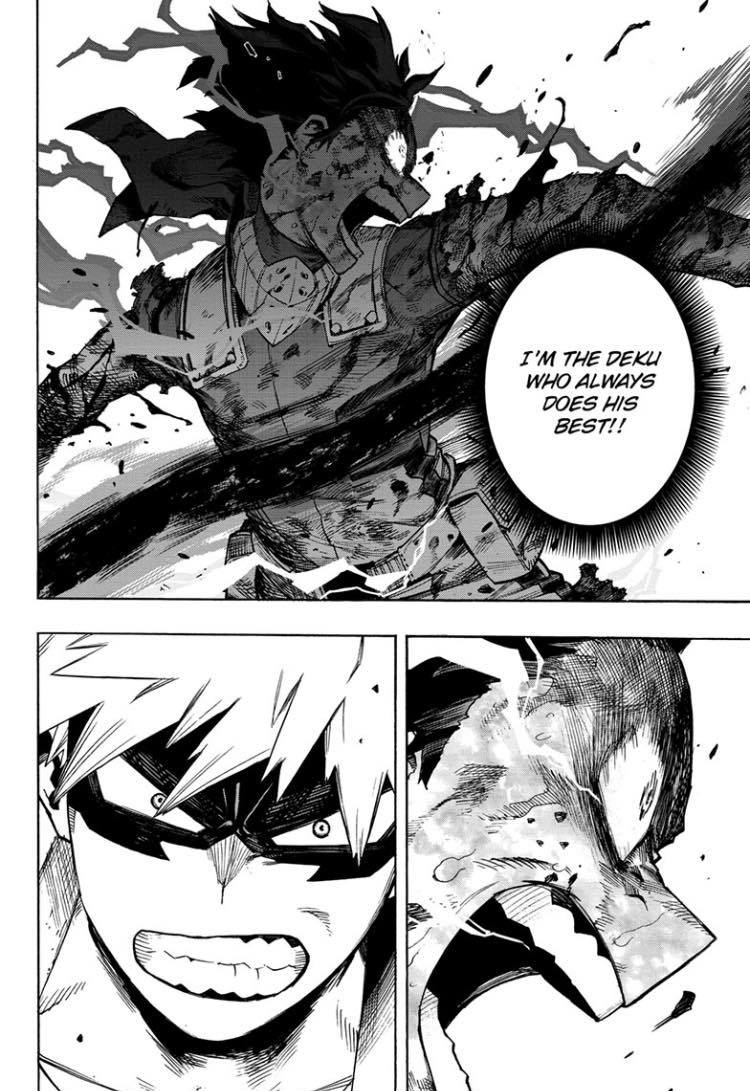 As much as I love Deku, he wasn’t mentally ready to take on something as big as One For All. He never was. A kid who spent his entire life being treated as lesser than because he didn’t have a quirk suddenly gets an absolute top-tier quirk. No one, not even All Might, the one passing the quirk down, has complete details on how it works. Also, that quirk? Has something to do with the main villain of the series, All For One.

Deku doesn’t ask how the quirk works, how it’ll affect his body, nothing. He’s just happy that he’s getting a quirk – and from his hero, All Might, of all people! Exciting, yes?

So Deku gets this quirk, hasn’t done a lick of training EVER, and it turns out the quirk can obliterate his body. All Might divulges this information after Deku’s agreed to inherit his quirk. Quirks, generally, are something you’re born with, so you have years to adjust to them. Deku has less than a year, and in that time he manages to, at least, get stronger physically so he can handle the raw power of his new quirk (kinda). This leaves him no time to actually use the quirk until he’s in the heat of the moment, and this becomes a running theme until he figures out ways to break himself less so he can keep fighting.

Nothing about this is good.

But Deku thinks it’s good because he finally gets his shot.

And All Might thinks it’s good because Deku’s so determined.

Um … how’s that working out for— 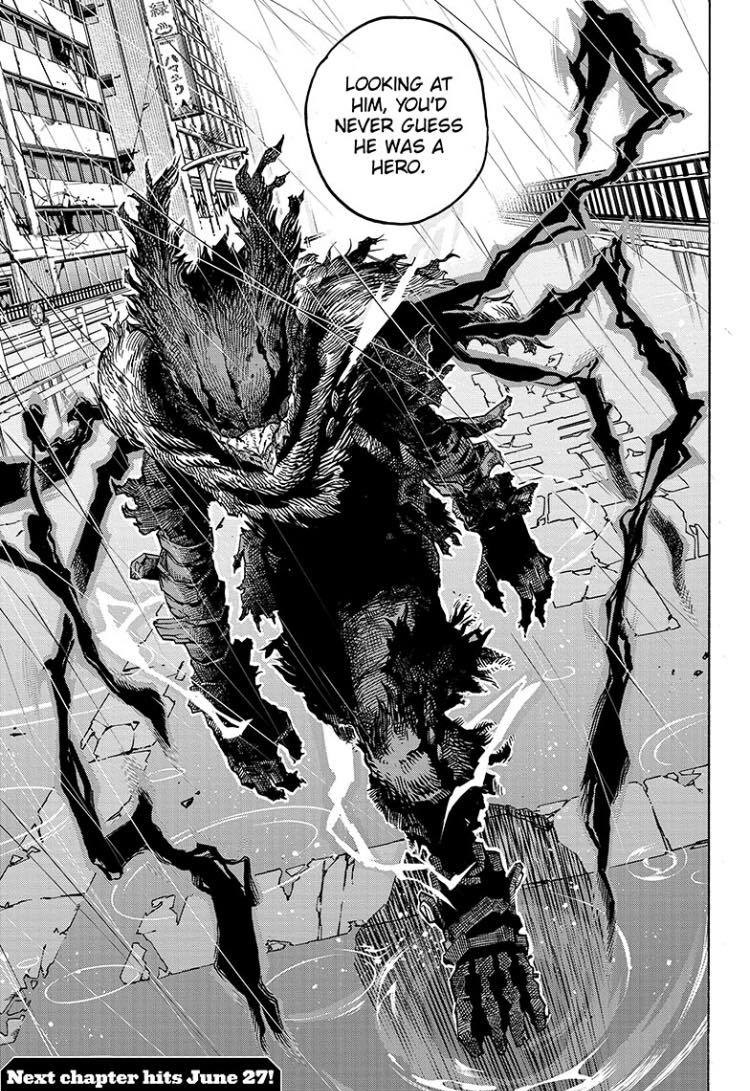 Yeah, that’s what I thought.

When I look back at the series I realize that this is ALWAYS where Deku was gonna end up. On top of having to rush his development, he’s very much the kind of character who has no problem with running into danger for the sake of others without thinking about what it’ll do to him. It’s similar to All Might’s method of heroics, and it’s a method that has a good standing in their society, and if we’re really honest, OUR society, too. This last chapter really shows, in a rather gut-wrenching way, just how far gone Deku is, how much he’s taking on, and how the people who see him don’t recognize him as a hero – even if he, hands down, looks exactly how any of us would look when we decide to forsake our own health for someone else.

Right now, Deku looks a lot like this guy: 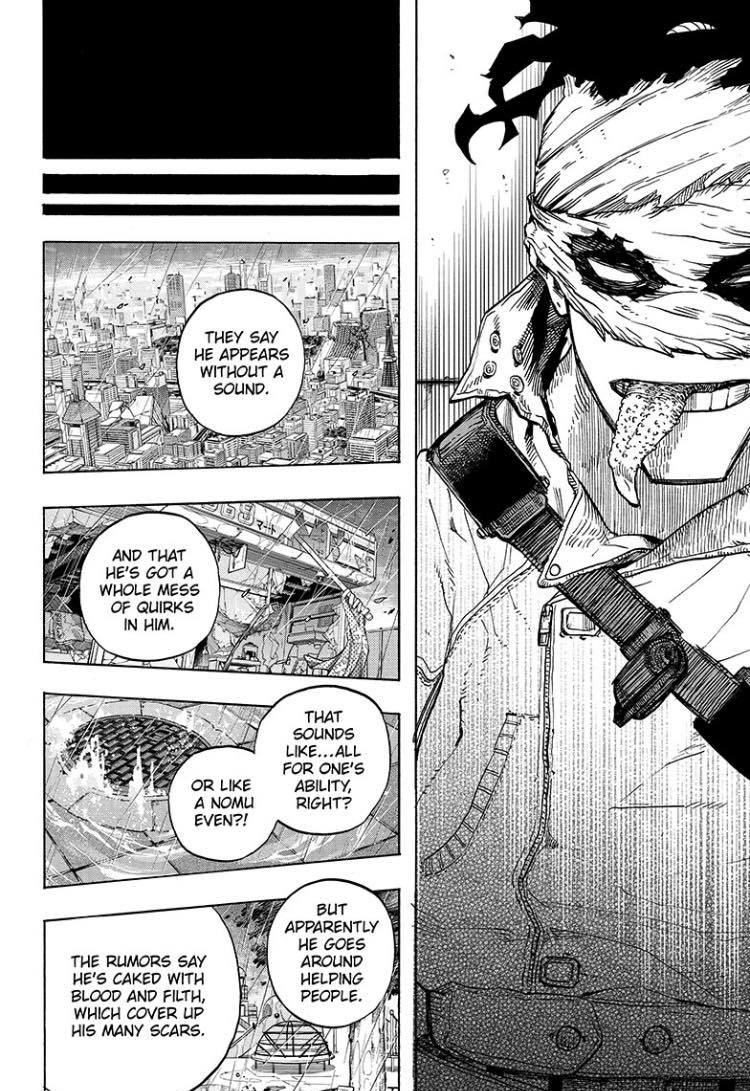 This can’t be a coincidence, because the only hero Stain respected was All Might, and Deku is very much acting the way All Might used to – not just in the video Deku lovingly watched as a child, but the times All Might would go off and do hero work even if he knew there was a limit to what he could do before his body shut down. All Might, however, had a larger-than-life image that made all of this look bright and “cover to a comic book” worthy.

From the beginning, when All Might first showed Deku how wrecked his body actually was, that was the sign of this “go beyond” message having major drawbacks. This idea where you show society a smile but you’re secretly suffering is not good. At all. What this means for Deku’s future, I’m not sure, especially since he just left All Might behind to go off on his own. I think it’s going to take a major event for him to snap out of this, and whatever that event is, I think it’s going to hurt.

Even so, I think Deku’s story is a very good way to show the side effects of teaching younger generations to work, work, and work some more. We’re constantly telling adolescents, and even adults, to push past what they’re capable of even if it harms them physically, mentally, or even if there’s very little to show for it. If it’s something that benefits society, the message is to do it, no matter what, and that kind of harmful mentality is instilled in us at a young age. Not only are you expected to destroy yourself, but you’re also expected to do it with a smile.

I hope the end message of this current arc with Deku is that there’s nothing wrong with trying harder, but if those attempts are causing damage to your well-being, then please, take a breath. Part of the message of working hard to get further has to include taking care of yourself. You can’t keep moving forward if it’s hurting you to do so.

It’s okay if you take your time, more importantly, you don’t have to take on the entire world by yourself. 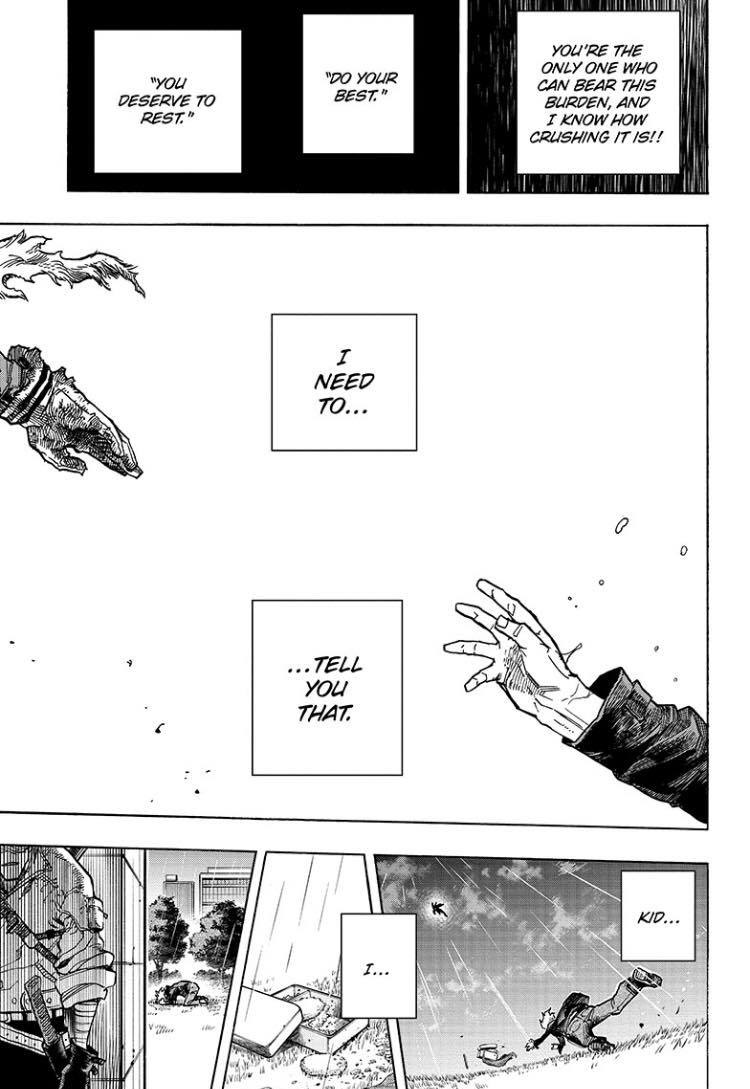