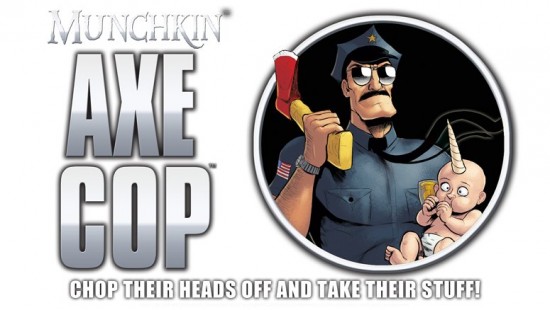 In news that literally caused my jaw to literally hit the floor, Munchkin card game creator Steve Jackson announced that a collaboration between himself and the creative half of Axe Cop that has a driver’s license has resulted in Munchkin Axe Cop.

Jackson made the announcement this morning on his blog, describing the new project:

Axe Cop and Munchkin are a perfect match. Doing this project will be total fun for me. Axe Cop has a manic energy that goes with the Munchkin story . . . kill the bad guys, take their stuff, and level up!

The game will be released in the third quarter of this year, and will feature original art from the Axe Cop creators. For the moment, the new game’s slogan is, appropriately, “chop their heads off and take their stuff!”

Upon reflection, I really cannot think of a better combination. Axe Cop, the anarchic creation of 5-year-old writer Malachai Nicolle and his 29-year-old artist brother Ethan Nicolle, is much loved for it’s lunacy and child-mind logic. Munchkin, a card-based satire of role-playing games, reduces even the most stalwart to a childlike state with it’s ludicrous cards and focus on backstabbing. Both Axe Cop and Munchkin shirk the rules of their genre, and focus on what’s most important: Wild, unabashed fun.