I Want To Believe: Mulder and Scully Finally Together IRL, Maybe 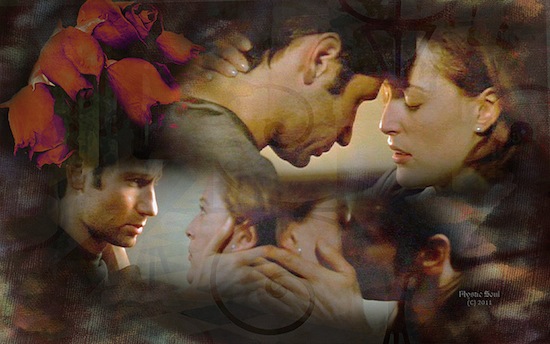 The X-Files had plenty of twisting, turning, long-running plotlines — What is the black ooze? Who is Mulder’s real father? — but by far the one that gave fans the most cause for concern was the “will they or won’t they” sexual tension that pervaded every second of the show. Seriously, you could cut that stuff with a knife and use it as a rich, creamy spread for your English muffin. Well, apparently David Duchovny and Gillian Anderson, who played the classic alien hunting FBI duo of Mulder and Scully, are now living in sin together in the midst of a torrid affair that is ripped from the pages of years of fan fiction. It also may have just as much grounding in reality as those years of fan fiction. But seriously, who cares? OMG MULDER AND SCULLY FINALLY GOT TOGETHER SQUEEEEEE!!!! Yeah, it’s possibly not true, but we’re still excited.

For those who weren’t fans and don’t understand why this is quite possibly the biggest of all possible deals; First of all, go watch the first season on Netflix. No, really, like right now. You can thank me later. Second of all, this was basically the backbone of the show. Sure, there were great Creep of the Week episodes and paranoia inducing story arcs about conspiracies within conspiracies, but man, at some point you’re just watching because you don’t want to miss the episode where these two finally do it. Such was the power of this obvious attraction that even a search through grimy sewers for a horribly mutated lamprey man or a race against time to capture a fisherman-devouring lake monster seemed like it could burst into sexy times at any moment.

David Duchovny’s publicist has weighed in on the situation to try and nix any rumors that the two former co-stars have picked up the only plot thread that matters, but we’re not buying it. Why? Because “No, no, there’s nothing there, the two are just good friends” is exactly what you have your publicist say when there is totally something there. That is some bush league, COMM 101 flack work right there. We’re also not buying it because once teased with the prospect of this actually happening, we refuse to live in a world where it is not true, so there.

So, the question becomes, who has gotten to David Duchovny’s publicist? What are they holding over his head? Just how far up does the conspiracy to make us believe that Gillian Anderson and David Duchovny are not knocking boots go? What will they do to keep the public ignorant?