We Discuss Chap Hop with Its Creator, Mr. B the Gentleman Rhymer

All hail the chap. 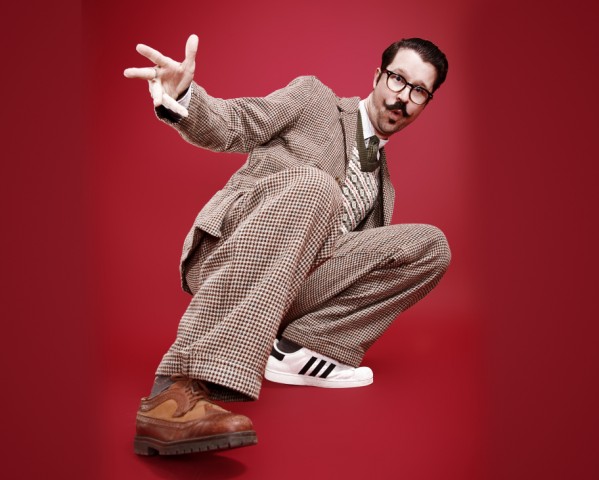 We’ll trust you to keep an open mind, dear readers, when we tell you that the mustachioed gentleman pictured above is a genius. His name is Mr. B the Gentleman Rhymer, and he’s the proprietor of a genre of music known as Chap Hop. What is Chap Hop? Who better to ask than Mr. B?

Mr. B made a recent visit to the U.S. from the U.K. to do a few shows in the greater New York area including a stop by The Waystation in Brooklyn, where we met up. If there is any venue in America more perfectly suited to host a British rap artist who plays a banjolele (yes, a tiny banjo) and has songs like “Curtsey For Me,” “Shelltoes or Brogues?” and “Grammar Song” than a steampunk bar with a TARDIS bathroom, then we’ve yet to hear about it.

We’ve been familiar with Mr. B and his work for some time, but weren’t sure our readers would have the same familiarity, so we asked him to summarize Chap Hop. He told us:

Chap Hop is reconnecting Hip-Hop and its ilk to manners and the Queen’s English. Say Afrika Bambaataa, Chuck D, and Terry-Thomas, Noël Coward, and George Formby — an English banjolele player — having a sweet sherry in a club somewhere and they decided to form a band. It would probably sound a bit like Chap Hop.

We think that’s accurate. Part of what’s so wonderful about Chap Hop is that we don’t think there are many people who know all five people Mr. B listed in that explanation, so regardless of the angle you’re coming to Chap Hop from, there’s probably something new you can get out of it and enjoy.

Clearly there’s a fair amount of affectation and performance that goes into what Mr. B does, but that doesn’t make it any less terribly important. The mission of Chap Hop is to celebrate things like manners, grammar, and dressing well over the more unseemly aspects of Hip-Hop culture. It ties in with a larger cultural movement to get back to these things after the slackerish decades of the 90’s and 00’s.

Mr. B is trying to celebrate what is best, and use it to affect the greater good. It would be easy to derisively use the word “hipster” to describe a well dressed man with an impressive mustache and a small banjo, but it wouldn’t be a fitting label. Hipsters tend to define themselves by what they don’t like, or more accurately by what they’re cooler than. Mr. B is sincere in what he does. Chap Hop isn’t about irony.

Beyond that, his music is also wonderfully enjoyable. Here’s the aforementioned “Curtsey For Me”

His most recent album Can’t Stop, Shant Stop was released on November 5th of this year, and we’ve had it in heavy rotation ever since. We even made it an editors’ pick on the Geekosystem Podcast.

Where in his earlier albums Mr. B set about defining Chap Hop in a rather self-referential way, Can’t Stop Shant Stop seems to be more critical of Hip-Hop in general. One somewhat misleadingly named song “Hip-Hop Was to Blame After All” manages to tell the history of the form, its corruption, and laments the fate of Hip-Hop pioneers like Kool Herc in under two minutes.

On stage for his performance Mr. B gives a lesson of sorts in the history of Hip-Hop. To the Waystation audience, he explained that Hip-Hop has its roots in New York with DJ Kool Herc. Herc’s real name was Clive Campbell, so Mr. B told the audience:

If anyone ever asks you who started Hip-Hop, just say “it was Clive.”

There is a fair bit of humor in what Mr. B does, but it’s clearly something he takes very seriously. Chap Hop isn’t a parody of Hip-Hop, though it’s very often funny. It’s a celebration. Something else that gets celebrated on the album is the “Corinthian spirit” which is a sporting term we were unfamiliar with because it’s a sporting term. It means to do something for the love of it rather than other gains. If you need examples check out Mr. B’s song “The Corinthians.” It mentions by name Wesley Willis, Alan Moore, Harvey Pekar, and many others we’re less familiar with. The chorus of the song is:

“The Corinthians” stands out on the album for a number of reasons. It’s the album’s “slow jam” and it plays as a sincere tribute to the people named in the song, and to anyone who loves something enough to give it their all. It’s really beautiful, and a wonderful example of the spirit of Chap Hop.

If you’re looking for a break from the endless loop of Christmas music we’ve all be drowning in this month, we really think you should check out Mr. B and get on board with Chap Hop. If you’re not looking for a break from Christmas music, don’t worry. Mr. B has you covered. He has you covered in a very NSFW way in which Santa gets drunk and does something we won’t mention with a carrot.

You can learn more about Mr. B on his website. Besides albums for sale, there’s also some interesting merchandise like club ties and cuff links.

We’d like to thank Mr. B for taking the time to talk with us before his show at The Waystation. He’s every bit the gentleman he presents himself to be, and as an editor’s note, I’d also like to personally thank The Waystation for hosting the event, having a TARDIS bathroom, and for calling an ambulance when I fainted during the show. They’re the best bar I’ve been to in New York, so if you happen to be in the area, do check them out as well.

(via Mr. B the Gentleman Rhymer)