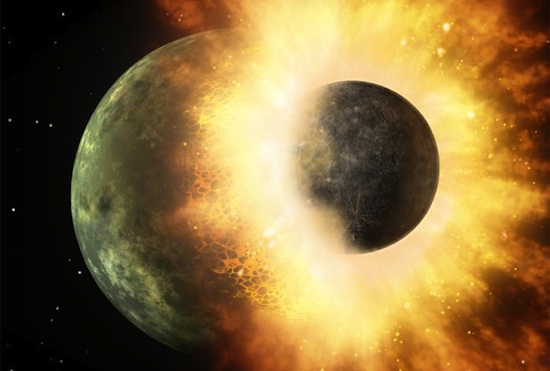 Earth’s unusually large, close moon is pretty key to life on the planet, governing the regular tide cycles that may have been necessary to set the stage for the first life in the planet’s oceans, but its origin has been the subject of a number of competing theories. The leading explanation also happens to be the most awesome one — that a planetoid about the size of Mars smashed into the Earth some four and a half billion years ago, dashing off a chunk of the still developing planet that hung around as the natural satellite we know and love. That theory moved a long way toward validation today with the finding that Moon rocks show chemical signatures consistent with being exposed to an explosion that was literally Earth-shattering.

The best evidence for the so-called Giant Impact Theory is that Moon rocks are very similar to Earth rocks in their makeup, with one major exception — they’re very low on volatile elements that react readily or evaporate easily. That discovery, made decades ago, suggests Moon rocks were Earth rocks at one point, but were subjected to an enormous explosion sometime in their existence, eliminating all but the most stable elements in them. That’s very consistent with the theory of a cosmic-grade fender bender chipping off a chunk of the Earth, but not knocking it out of orbit.

There’s just one problem. If a collision of that magnitude rocked the Earth, researchers would also expect to find evidence of a geologic process known as isotopic fractionation. For those of you who may not be astrogeologists, isotopic fractionation is a sort of elemental sorting process. After a rock is melted, lighter isotopes (strains of an element with fewer neutrons) of it will evaporate off, leaving behind heavier isotopes (with more neutrons). Since there’s been no evidence of that process, the Giant Impact Theory has been left up in the air for decades as probable, but not provable. Until now.

A team of researchers at Washington University in St. Louis analyzed  moon rocks gathered during the Apollo missions, finding higher than expected concentrations of a heavier form of zinc. While most of the volatile zinc would have been burned away in the impact that created the Moon, what remained behind would be the heavier zinc isotopes, which researchers found in all 20 of the Moon rocks they looked at during their research.

If it all checks out — and the study, which will be published tomorrow in the journal Nature looks pretty darn thorough — it will provide proof that the Moon was born from an explosion and impact that boggles the mind. That in turn suggests that life on Earth may not have been possible without a very nearly cataclysmic event, which we’re willing to say is pretty damn cool.

(via PhysOrg, image courtesy of NASA/JPL)