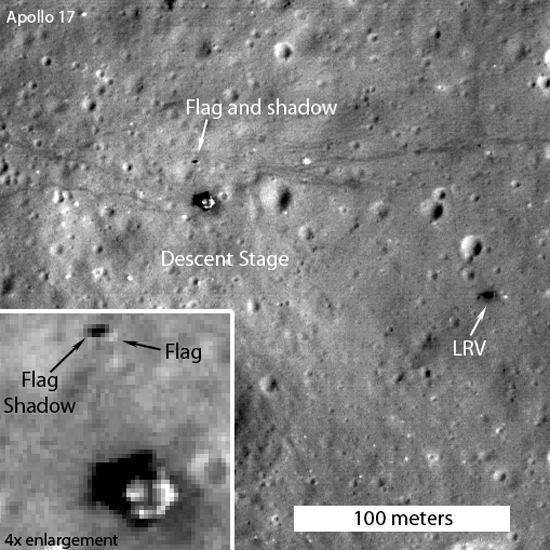 Ignoring the conspiracy theories about whether we landed on the Moon at all, the team behind the Lunar Reconnaissance Orbiter Camera, or LROC, received the most questions prior to launch about the Apollo landing sites. What would we be able to see? Would we be able to see the American flags? As it turns out, yes. Detailed analysis of the images returned from the LROC has confirmed that the flags planted by most of Apollo missions are still standing where they were erected.

A video of the Apollo 12 landing site is available too and showcases the objects we left behind. If you look closely, you can make out both the lander and the flag:

It surprised Mark Robinson, a chief scientist for the camera, to find actual evidence of the flags themselves. The poles were considered highly likely to still be intact, but the actual flags were considered to have potentially decayed due to a number of environmental factors bearing down on them. Robinson had the following to say in a post on the LROC’s website:

Personally I was a bit surprised that the flags survived the harsh ultraviolet light and temperatures of the lunar surface, but they did. What they look like is another question (badly faded?).

From the images gathered, every single flag America ever planted on the surface of the Moon has been confirmed to still be standing minus the flag from the Apollo 11 mission. Robinson notes that Buzz Aldrin had previously said the flag was knocked over by the exhaust from Apollo 11’s ascent from the Moon. Looks like we learned our lesson and put the flag a bit further away from the giant rocket after that.