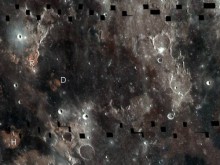 It’s been a long time since any one has been to the moon, but we’re still learning valuable information about it for use if and when someone does go back. For instance, Mark Robinson and Brett Denevi (from Arizona State University and John Hopkins University, respectively) have found, by cleverly shading some pictures from the Lunar Reconnaissance Orbiter, that the moon has a whole bunch of titanium deposits.

The Orbiter’s camera images the surface at seven different wavelengths, and if you know what material absorbs what kind of light in what ways, you can get a pretty good idea of what kind of materials are on the lunar surface. It turns out there’s a lot more titanium than anyone previously thought.

The whole project started by an analysis of the Apollo 17 landing site. Using the Hubble Telescope to survey the area, they found spots that looked like they could be titanium deposits and, conveniently enough, there are samples from that site that can be used to verify. Turns out they were right. Using the camera on the Lunar Reconnaissance Orbiter, they were able to survey a much larger area of the moon and confirm that the Apollo 17 landing site wasn’t an anomaly; the Moon just has a lot of titanium for some reason.

There are a couple of offshoots to this discovery. First of all, it suggests that the Moon formed in very different circumstances than Earth. Particularly, it probably formed in an environment with a lot less oxygen. Second, it turns out that titanium is efficient at absorbing certain elements of solar winds, including helium and hydrogen, which means that these titanium deposits could be a fuel source just sitting around waiting for someone to come and tap it.

In addition to the fact that it’s just cool to learn more about the Moon, this information could also be used to direct future astronauts (or even colonists) to landing sites that would have an abundance of useful substances to mine, which would be good places to set up camp. Of course, nothing like that is going to happen any time soon. Besides, if we want a thriving Moon colony, someone would have to develop some kind of gigantic rail gun to fire goods back to Earth and some sort of supercomputer to control it.